close
Pouring it on frosting-thick 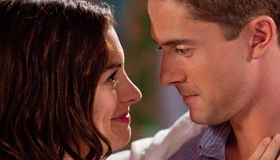 Love is in the air and on the ground and in the restaurant and at the airport and in the flower shop and on the set and in the office and at the cemetery in Valentine’s Day, a classic case of being too much of a not-very-good thing. Billboards and print ads tout this as a romantic comedy from the director of Pretty Woman, which only proves that director Garry Marshall hasn’t made a movie up to his early-career standards since the administration of George H.W. Bush. Packed to the rafters with star talent and greeting card sentiments, this is best appreciated by women who cry at TV commercials. Still, it’s an inoffensive picture, so look for decent first weekend numbers as the fairer sex drag their boyfriends kicking and screaming to showings on the film’s titular holiday, the only time seeing this movie makes any sense.

Marshall is not a filmmaker of raw emotions and there’s no way he was going to start now. He’s clearly aiming to create a Valentine’s Day perennial which seems a bit unnecessary since there are better love stories featuring multiple, intersecting characters but don’t require calendar-dependent hooks. And the ones that do, like Love, Actually are infinitely better and don’t suffer from a glut of characters vying for attention. But give credit where it’s due: Katherine Fugate’s script is weighed down by incident but still pretty nimble (the colored index cards Fugate probably used to track each storyline could crush a man). Yet there’s not much insight into the mysteries of love and, even more crucially, there aren’t many genuine laughs. And with so many balls to juggle, it begs wondering how many characters are really needed to make the obvious point that love is totally awesome.

Ashton Kutcher, who has never earned a second of empathy in any role he’s ever tackled, plays Reed, owner of the flower shop around which much of the film revolves. After proposing to his hesitant girlfriend, Morley (Jessica Alba), he discovers that his bestest best buddy, Julia (Jennifer Garner), is unwittingly the other woman in the extramarital dalliance of hunky doctor Harrison (Patrick Dempsey). One can easily predict where Reed and Julia will end up. So if you don’t like that storyline, there are plenty of others packed into this steroidal stew of casting coups. Indeed, in an era when studios are trying to mine untapped markets for additional revenue, the multi-culti Valentine’s Day tries to be all things to all demographics. There’s the army captain (Julia Roberts) amiably chatting with her seatmate (Bradley Cooper) on a plane flight home, the older couple (Shirley MacLaine and Marshall mainstay Hector Elizondo) about to face a marriage crisis and two smitten high schoolers (“It” Kids Taylor Swift and Taylor Lautner) doing absolutely nothing of interest. And conservative audiences will surely approve of the two young teens (Emma Roberts and Carter Jenkins) who decide they’re just not ready to lose their respective virginities (although Red State crowds may chafe at the gay and interracial hookups). All these characters approach the central topic from different angles yet, by necessity, arcs are simplified and emotions are conveyed with a two-by-four. So we’re left with whatever charm the actors can convey. The only A-lister giving off any heat is Anne Hathaway as the office drone paying the bills by performing phone sex in various foreign accents. Unfortunately, she’s paired with the ever-bland Topher Grace, barely keeping up with the always alert and winning Hathaway (whose ascendancy began with Marshall’s The Princess Diaries).

There is some loneliness and pining here, but it’s not the kind that asks to be explored, it’s the lazy kind waiting to be conquered in time for the final fade out. Kevin (Jamie Foxx) is a local sportscaster suffering from “Valentine’s Day acid reflux” and relegated to anchoring a V-Day puff piece, instead of investigating whether pro quarterback Sean Jackson (Eric Dane) will retire to start a family. To get the scoop, Kevin interacts with a workaholic singleton (Jessica Biel) who throws an annual “I Hate Valentine’s Day” party for those who believe someone as gorgeous as Jessica Biel could possibly be single, except by choice. Much of this is cleverly constructed, but when a movie is so long and heavily engineered, it inevitably backs itself into corners that can only be escaped with coincidences, contrivances and shots of adorable children, upon which Marshall’s fluffy filmography often relies. Like many of his comedies, Valentine’s Day is basically a broad and prettified urban fairy tale. In fact, if the film has any lasting value, it’s as Los Angeles travelogue. Marshall and crew blanket L.A., and not all of their choices are obvious tourist locales like the Hollywood sign, the Guinness World Record museum and the Beverly Wilshire Hotel (which Marshall and Julia Roberts made legend in Pretty Woman). There’s also the Venice canals, the Bistro Garden restaurant in Studio City and the L.A. Flower Mart, along with resident in-jokes like sign spinners and, unimaginatively, low riders. It’s fun if you’re a local, but Mick Jackson’s L.A. Story covered the same ground and was able to tweak the city with less characters, punchier humor and real heart. So here’s the moral of Marshall’s L.A. story: while audiences may thank Julia Roberts, Jamie Foxx, Anne Hathaway et al for cutting their fees to spend a few days shooting with a beloved director, sometimes less really is more.