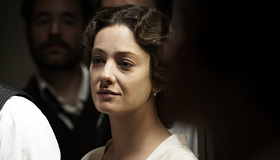 Ida Dalser's (Giovanna Mezzogiorno) comfortable life as a beauty salon owner quickly changes after meeting Benito Mussolini (Filippo Timi) in 1907. She sells her business and pawns her jewels in order to fund the young journalist's start-up newspaper Il Popolo d'Italia. They marry and in 1915 their son, also named Benito, is born. But Ida soon discovers that her influential husband has another wife, Rachele Guidi (Michela Cescon). Once Mussolini is in power and requires a partnership with the Vatican, the Italian dictator places Ida under house arrest, destroys all evidence of their marriage and hands over his infant son for adoption. For the rest of her life, Ida fights to find her son and be recognized as Mussolini's wife.

Vincere's stunning turn of the century setting, powerful score by Carlo Crivelli, perfect use of archival newsreels and Hitchcock-like drama involving a powerful husband persuading others that his wife is mad draws fair comparisons to grand opera and the Russian master Sergei Eisenstein. Audiences who appreciate filmmakers who push the artistic boundaries of cinema will generate positive word of mouth for Vincere. While Mussolini's story is a familiar one, Vincere focuses on the little known chapter involving Dalser and her son. Vincere offers true surprises; a rare thing with historical dramas. The sad, surprising conclusion of Dalser's life makes the film all the more enjoyable.

Bellocchio remains well known for his debut film Fists in the Pocket, about a family of epileptics, and more recently for Good Morning, Night, about the assassination of former Prime Minister Aldo Moro by the Red Brigades. Vincere reveals a filmmaker still learning new technical skills and continuing to hone his storytelling talent. Bellocchio shows courage for attempting melodrama with such flair and passion and for that reason Vincere is inspiration for younger filmmakers afraid of being over-the-top. Cinematographer Daniele Ciprì makes beautiful use of the period locations. Editor Francesca Calvelli stitches together the archival news footage and dramatic scenes with precision. Art Director Briseide Siciliano, set director Marco Dentici and costume designer Sergio Ballo help male Vincere one of the more beautiful films in recent memory.

Popular Italian actress Giovanna Mezzogiorno (Last Kiss) displays talent as well as beauty as the persecuted Ida. She is the pivotal character in the movie and as the drama turns darker, Mezzogiorno continues to make Ida's plight believable and compelling.

As Mussolini, Filippo Timi makes full use of his smoky good looks, booming voice and operatic gestures. It's easy to see how Ida would fall in love with such a charismatic man. In the second half of the movie, Mussolini appears via newsreel footage and Timi steps aside to plays his discarded son, now a grown college student who imitates his famous father perfectly.

Great operas are also tragic love stories and with that in mind, Vincere's greatest assets are Mezzogiorno and Timi as its damaged couple. Marketing campaigns that emphasize the mystery and the tragic romance over the history will improve the film's chances in the specialty marketplace. Regardless, Vincere an impressive addition to Bellocchio's illustrious career.