close
Watching the rebirth of Disney from the inside out

on February 05, 2010 by Barbara Goslawski
Print 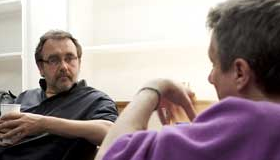 This film declares itself to be the story behind the story—the truth behind the media’s chronicle of the recent fall and rise of the Disney animation studio. Don Hahn’s documentary is an animator’s attempt to invigorate what is otherwise a dry story. He succeeds for the most part. It may be a story about how some of the most successful recent Disney movies came to be, but it’s also a story of a corporation trying to re-invent itself according to the demands of the market. The Disney name will draw an audience but the word of mouth will lead most to wait to see it on television or DVD.

By the mid- eighties, the Disney studios were in financial trouble. The public had lost interest in their films, and quite frankly the films had lost their original magnificence. As the executives struggled to create solution after solution, the morale in the trenches disintegrated. Michael D. Eisner, Jeffrey Katzenberg and Roy Disney (the nephew of Walt) lead the charge, even as they fought each other. Many animators hung on and new faces appeared as the company eventually rose from its ashes a decade later to create a string of blockbusters that included Who Framed Roger Rabbit, The Little Mermaid and Beauty and the Beast.

Animators are fun. They are witty, irreverent bad boys who like to disrupt the status quo. Imagine a studio full of them, banded together in the behemoth known as Disney. The film is full of moments chronicling the animators and their behind the scenes activities during the events of the 1980s and 1990s. Hahn spends much of his time interacting with the official story, the one mainly played out in the media. It does provide the necessary through-line for cohesion but the supposedly secondary one provides the much needed verve. But the styles and sensibilities behind these two threads never conjoin, resulting in a surprisingly plodding and pedestrian recounting of events.

Hahn’s documentary is primarily straightforward, using talking heads, newscasts and eccentric home movie clips. Between creative bursts, animators filmed their own grainy, handheld version of events. The contrast between these more candid moments and those of the polished professionals is evocative, reminding us that this is a story about how the development within a corporation affects the individuals inside.

Luckily, Hahn’s creativity extended beyond the traditional documentary form. Animators frolicking about and acting out Star Wars scenes is one thing. This tactic can only do so much with regard to fleshing out the film. Being animators, they are prone to artistic flair and Hahn takes full advantage of this in the doc. He had access to, and liberally uses, the caricatures that his colleagues drew whenever they had a strong reaction to one of their bosses. These are incredibly funny in their expressiveness: a simple act of losing one’s temper results in a caricature of your head popping off while enormous flames spew wildly out of your mouth. Must be seen to be fully appreciated!