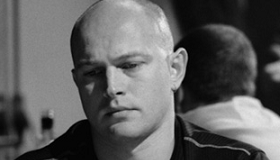 Babnik (the Russian word for “womanizer”) is a promising, no budget, third feature from Bay Area filmmaker Alejandro Adams about petty Russian mobsters in America. What’s best about this picture is the unique milieu (there are few films set in the U.S. that feel quite so much like a foreign film) and the frequently convincing ethnographic feel to many of the scenes. For much of Babnik’s running time, the viewer could easily be convinced they’re watching a fly on the wall documentary offering a sordid inside view of contemporary sex trafficking, meticulously blended with an unflinching story about the vulnerability of impoverished Eastern European immigrants to exploitation at every level once they come to the West. Video level production values, heavy use of subtitles, a puzzling decision to shoot this project in the old 1:33 home video aspect ratio rather than the ubiquitous 16 x 9 that is so readily available to the unfunded filmmaker these days and somewhat uneven secondary performances will hamstring this movie as a commercial property, but as a demonstration of fresh directing talent, it’s a rousing success.

An ensemble film, Babnik uses scams, cons and betrayals both small and large to link a diverse set of characters. At the top of the pyramid are Misha and Sasha (both flawlessly embodied by Michael Umansky and Alexander Shkolnikov respectively), two middle-aged crooks who seem to be almost congenital exploiters. Their scams revolve around a “modeling agency,” where they lure young Russian women into restrictive contracts and mounting debt with promises of careers in high fashion. The downward spiral these girls are sucked into is suggested rather than depicted—in a series of cinema verité scenes that are the films strongest elements, we see Mischa seducing young hopefuls with a repetitive spiel about their beauty and their need to buy expensive “special vitamin supplements” to keep their figures, then quietly threatening other prospects with financial ruin based on their “debts” to the agency unless they pose for web porn or involve themselves in other undefined sexual scams.

Meanwhile, Artem (Artem Mischin), an introverted Russian émigré, has just been fired from yet another job because his American employers don’t want him to qualify for health benefits. This sends his shrewish wife, Yelena (Yelena Segal), into a tirade about his inadequacies, and Artem soon finds himself in a gambling den with links to Misha, where his financial desperation combines with free-flowing vodka and the liberal credit he’s inexplicably granted, with predictable results. To work off his $30,000 debt, Misha gives him an especially squalid task: kidnap a 14 year old girl and deliver her to an anonymous client, for presumably harrowing sexual acts.

In synopsis form, that sounds like a sensationalized treatment of criminal material. In fact it’s one of the foremost pleasures of Babnik that Adams opts for a low key and nuanced approach to both performance and scene construction, with Umansky especially effective at playing evil as something banal and unremarkable. Babnik makes the vilest kind of criminality seem lived in and normal. Separated by language and custom from the wider American milieu it preys upon, it’s easy to see how such a torturous underworld is able to hide in plain sight.

The camerawork in Babnik undermines the impact of the film in some measurable ways. By opting to shoot almost every scene as a series of tight close-ups, Adams has prevented us from getting much sense of the topography his characters inhabit. This is a critical omission, since every character in Babnik is in one way or another at war with the wider American culture the film’s visuals choose not to admit into the frame. There’s also a twist ending that seems needlessly obtuse; while it’s possible to puzzle out Misha’s motivations in a final lethal series of betrayals, it takes more work than it should, considering the pay-off really doesn’t tell us anything about him we haven’t learned with more subtlety elsewhere. Still, there is so much that’s unique and challenging about this movie that it would be churlish to accentuate the negative. As a message to the future, Babnik marks Adams as a filmmaker to watch.