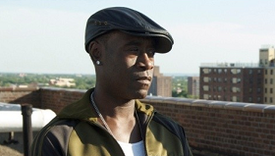 Director Antoine Fuqua returns to the gritty world of conflicted cops that he mined so successfully in the Oscar winning Training Day, but this time the focus is on three damaged guys on the Brooklyn police beat who face mean streets and private demons every day leading to an uncertain fate for each of them. Outstanding performances from Richard Gere, Don Cheadle and particularly Ethan Hawke lift this genre material into something special for fans of the actors. With decent nurturing from Overture this compelling and violent drama should find an admiring if limited audience from its initial theatrical run and become a big seller on DVD.

Premiering at the 2009 Sundance Film Festival, Brooklyn's Finest was picked up by Senator Films despite mixed reviews, but the cash-strapped, fledgling company couldn't come up with the dough for prints and advertising so the film was orphaned until Overture came to the rescue, financially and creatively as it has been extensively re-worked since its early fest screening. What makes it click is the character study of three cops going through their own private hells while trying to make sense out of the Brooklyn police force jobs they still cling to. Cheadle plays Tango, a veteran undercover cop working the down and dirty drug beat but longing to get out. He's on the verge of losing his identity as he befriends Caz (Wesley Snipes), a tough dealer who has an almost brotherly relationship with a cop that's begun to take on the traits of those he is supposed to be tailing. Hawke is Sal, a proud but beaten-down cop and father of five, with two more on the way, who resorts to stealing drug money in order to provide for his family and his wife (Lili Taylor), who has asthma due to mold in their home. Sal is played as a tragic figure getting deeper into crime and inevitable trouble. Gere is Eddie Dugan, handsome and together externally but falling apart on the inside. He's just a week away from retirement when he gets sucked into one of the most dangerous situations ever. On the side he's involved with Chantel (Shannon Kane), a prostitute who provides solace he can't find within himself.

As the director weaves these three character-driven stories from rookie writer Michael C. Martin's strong script into a satisfying whole, he lets his actors shine just as he did with Denzel Washington who won as Oscar in Training Day opposite Hawke who was nominated. Here Hawke gets the best of Brooklyn's Finest, brilliantly playing a sadly misguided but desperate man trying to make a better life for his family but getting sucked deeper and deeper into the easy money found in underworld drug connections. Gere is also splendid and mercifully low key enough to make us care despite the fact that he can't seem to erase his movie star good looks. Cheadle's superb as a guy who lost his soul somewhere down the line and is looking to reclaim it and lift himself from a rudderless ghetto. Snipes makes a winning return as Caz, and has some terrific and revealing scenes opposite Cheadle. In a brief supporting role Meg Ryan is also fine along with Brian F. O'Byrne and Will Patton. Shannon Kane is memorable as the prostitute Gere hooks up with.

Brooklyn's Finest may not qualify as the finest for this ace cast but they give it their all in the riveting, if at times uneven drama.