close
Not even Clerks with guns 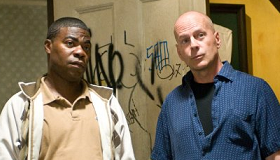 Kevin Smith’s take on the interracial buddy-cop movie craps out, leaving Tracy Morgan waiting for the ideal big-screen vehicle and Bruce Willis treading water between the action-hero and character-role phases of his career. The two play NYPD detectives who rid Brooklyn of some nasty Mexican drug dealers, rescue a Latina beauty and inadvertently keep the borough’s streets safe from sustained laughter. An ultra-thin spliff, Cop Out never sparks, although knowing that in advance won’t deter moviegoers who believe pairing Morgan & Willis with Smith equals hilarity. They’re likely to guarantee one strong weekend at least.

Morgan’s presence is an insurance policy up to a point, since his naïf persona is naturally humorous. Yet aside from a handful of loopy, off-the-wall bits, Cop Out—the first feature Smith has directed but not written—is pretty bland stuff. Airplane food has more flavor, and they make you pay for that now, too. Of course the material skews toward adolescent males and their slightly older, slacker brethren, but even they’ll be asking, “Tina Fey, where are you?”

There’s every reason to believe the best moments are attributable to the improv skills of Morgan and Sean William Scott, who plays a drug-addled, acrobatic thief. Screenwriters Robb and Mark Cullen rely heavily on a non-stop torrent of cussing, so much so that Susie Essman’s appearance as a pistol-packing, foul-mouthed homeowner fizzles for lack of contrast. (If she can’t make the f-word funny, no one can.) Overall, the picture feels slapdash and inorganic, too violent and perfunctory to be a worthy successor to 48 Hrs., Lethal Weapon or Running Scared.

Jimmy Monroe (Willis) and Paul Hodges (Morgan) have been on the job together for nine years. No orientation is necessary when, during the opening scene, Paul (amusingly) interrogates a suspect using lines from a plethora of movies and Jimmy (less amusingly) draws a phallus on the two-way mirror for the perp to fellate. While Jimmy’s the adult in the relationship, his childlike side is tapped when he’s forced to sell a prized baseball card his father gave him. He needs the cash to pay for his daughter’s wedding and thereby cock-block his ball-busting ex’s rich husband (Jason Lee). The card is stolen, leading the crime-fighters to an ambitious drug dealer nicknamed Poh Boy. When this baseball-loving cholo isn’t having his little brother execute an underling in church, he’s using the batting cage in his basement to torture people.

It wouldn’t be a Kevin Smith movie without lots of sexual and scatological banter, plus a cloud of endangered masculinity. In addition to Jimmy’s precarious financial status, Paul suspects his wife is cheating and uses a Nanny Cam to garner evidence. It wouldn’t be a cop comedy without an irate Captain suspending our heroes and a pair of rival detectives in the squad (played by Adam Brody and Kevin Pollak) pestering them. Cop Out can be viewed as post-racial when it comes to Paul and Jimmy (they have no compunction about dragging a white suspect behind their car); not however, when it comes to the thugs. The Mexican baddies are caricatured in a way that smacks of white suburban paranoia—the shared love of baseball doesn’t qualify as unifying. On top of the sexual insecurity, it all adds up to a disappointingly juvenile escapade.

The production values are sub-standard across the board. Smith wasn’t hired to stage first-rate shoot-outs and chases, and it would be unfair to judge him too harshly based on the action sequences. Yet letting him edit the picture, whether it was a matter of creative or cost control, was a mistake. The movie has no flow and the frequent insertion of stock overhead shots of Brooklyn only exacerbate the choppiness. Owing to a combination of poor sound design and a generic accent, it wasn’t until reading the press notes that I realized Fred Armisten is meant to be a Russian in his cameo.

Cop Out may prove to be a hit, but that doesn’t mean the talents of Morgan and Willis aren’t being squandered. Black Thunder and White Lightening they’re not, Another 48 Hrs. it’s not.