close
A surprisingly good take on the superhero genre 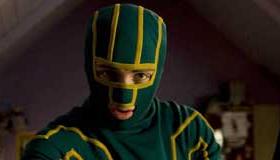 A clever movie premise based on an obscure comic book has been turned into, okay we’ll say it, a fanboy’s kick-ass wet dream of a movie that could be a surprise Spring smash. Toplining Aaron Johnson as a geeky teen who dons a yellow and green spandex wetsuit and turns himself into a self-styled superhero, and featuring Nicolas Cage in a smaller but key role, this action-filled and very funny flick should clean up at the box office with its target young male audience, and maybe beyond. Financed for a relatively measly $30 million (considering the impressive effects work on screen), look for Kick-Ass to do just that, leading to a possible franchise.

Working from the original comic book by Mark Millar and Josh S. Romita Jr., Matthew Vaughn directs and co-writes this revenge-of-the-nerd tale about an ordinary New York teen, Dave Lizewski (Johnson) who is such a comic book nutcase he actually orders up his own superhero suit on a discount internet site and wrong-headedly thinks it comes with special powers. In no time he discovers, in the most painful ways, that he has zero chance of becoming the next Spiderman, or any variation thereof. But with luck on his side (not to mention a crazy outfit) he eventually manages to capture the imagination of the public, becoming a web phenomenon and a threat to the local mafia—thanks in part to his new connection with an unusual crime fighting father/daughter duo known as Big Daddy and Hit Girl. Played with spirit and pizzazz by Cage and scene stealer Chloe Grace Moretz as an 11 year old, gun toting, foul mouthed little girl, this pair have been working to bring down the entire Mafioso operation of local kingpin Frank D’Amico (Mark Strong), and now Kick-Ass has inadvertently become a part of their much more experienced team. Adding to the complications is the emergence of Chris (Christopher Mintz-Plasse), the spoiled rich-boy son of Frank, who morphs into Red Mist, the flamboyantly attired new nemesis to Kick-Ass. It all leads, of course to a big showdown (actually a few showdowns) in which Kick-Ass must summon his inner-Superman to save the day—with a little help from his friends.

Johnson is ideally cast as the nerdy and awkward teen that lives and breathes the comic book world until he gets too close for comfort. He has a likable quality that serves the film well, but Moretz steals every scene she’s in as the toughest movie kid since Tatum O’Neal took up smoking in Paper Moon. With her extreme violence and profanity Hit Girl is definitely going to stir up controversy among parents who don’t find her a perfect role model, but the purple-wigged Moretz socks it home and then some. As her father Cage is a thorough delight in his best screen outing in some time, amusingly underplaying all his scenes. Mintz-Plasse also scores well with his now trademarked deadpan delivery and spot-on comic timing. Strong is a solid villain as usual.

Vaughn delivers one rollicking and raucous set piece after another but never loses sight of the fun. Kick-Ass has it all, the triumphant comic book movie fans have been waiting for with non-stop excitement, laughs, heart, originality and total entertainment. Move over Iron Man. There’s a new superhero in town and his name is Kick-Ass.