close
Funny and touching, this one looks at duality as war

on February 26, 2010 by Barbara Goslawski
Print 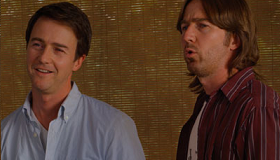 Writer/director Tim Blake Nelson manages a finely tuned balance that is rare in cinema. Moving from the far reaches of comedy to the nether regions of drama, he never skips a beat or sets the pitch too high. Leaves of Grass spins the notion of 'you can't go home again' around and then kicks its protagonist in the ass. (Yes, you can go home Billy-in fact you had better do so now.) Nelson creates an original take on this age old theme that is also entertaining. This film is a wild ride that manages not to derail. Edward Norton's performance in the dual roles of the not-so-identical twins is certain to create a buzz. Actually the twins are complete opposites. Bill is a Classics professor, the uptight and repressed New Englander who gives the term "finicky" new meaning. His biggest concern is fighting off the advances of a student reciting original poems in Latin while deconstructing them. Brady is a modern day hillbilly, smart enough to create his own complicated system of growing pot but not savvy enough to stay on the good side of the criminal elements to whom he is indebted. Sounds like the makings of a broad farce but Nelson's grasp extends farther. When Bill is forced to return home to the Oklahoma he has fought so hard to be rid of, he still has some demons to face. It's not just an identity that he believes to be inferior, it's a heritage that he has grown to loathe. This heritage is represented most strongly by his mother (Susan Sarandon), a woman driven only by desire. It's that messy emotional realm that makes Bill squirm. At least brother Brady displays some scientific know how. And it's that antithesis that drives the film. Brady and his mother have allowed their passionate natures to rule. They even stay close to nature, living in Oklahoma, away from any pretence of big city civilization. Bill's intellectual pretences run contrary to everything they represent. Thankfully, Nelson manages to steer clear of clichés as Bill's facade inevitably begins to fade. The writer/director's references to Walt Whitman's poetry classic, Leaves of Grass are more foundational than showy. This title suggests both a classic piece of literature and a reference to illicit drug dealing-both clever and hilarious. What's even more fitting is that the original book was also trying to balance a duality, that of the natural versus the intellectual. Nelson nurtures a complex symbiotic relationship between these two oppositional forces. Because his vision encompasses all the nuances in between, he is able to play with genre references and styles. The result is a rich tapestry of experience that weaves a cohesive whole. Leaves of Grass is refreshingly original: a dramatic film with traces of the crime genre, flat out silliness, biting wit and sentimentality. Sounds almost impossible to pull off, but Nelson manages this effortlessly. Distributor: First Look Director/Screenwriter: Tim Blake Nelson Cast: Edward Norton, Susan Sarandon, Keri Russell, Richard Dreyfuss and Tim Blake Nelson Producers: Tim Blake Nelson, Edward Norton, Bill Migliore, John Langley, Elie Cohn and Kristina Dubin Genre: Comedy/Drama Rating: R for violence, pervasive language, and drug content. Running time: 105 min. Release date: April 2 ltd.