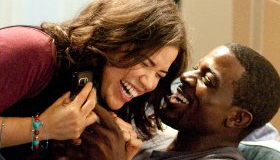 Milking the minority conflict thing like it’s going out of style (maybe because it is), Our Family Wedding is loosely tailored studio fluff, but it’s innocuous enough (even with the oddball, racist slurs) to hit a mark with the crowd it depicts and tries to play to. Lucia (America Ferrera) and Marcus (Lance Gross) have been living together in secret. In fear of their family’s reactions they’re planning to meet with the parents in one big bum rush of a restaurant dinner: of course it doesn’t go as planned and broad but not-funny conflicts occur. It’d all be pretty ho-hum weren’t it for some decent chemistry between the leads and the effortless presence of Regina King and Forest Whitaker. As with most wedding movies, numbers should be good.

Lucia and Marcus make for a good fit, but their fathers are dead set on not coming together at all. Lucia’s father (Carlos Mencia) runs a towing and car detailing company. A successful independent businessman, he’s learned to neglect his wife, Sonia (Diana-Maria Riva), in service of his children. Brad Boyd (Forest Whitaker) is a night-drive DJ who fought for custody of Marcus when he and the ex-wife split. The ex-wife put up no fight. Since then Brad’s become a shameless womanizer. A brief but high chemistry brunch scene with Brad’s friends (Charlie Murphy and a scene stealing but uncredited Taye Diggs) makes light of matrimony’s ability to suck the man out of The Man. Each gender role, they suggest, shrivels up and dies once the hunt is over—and that’s the premonition they’re offering Marcus. Lucia sees her mother neglected and has a longstanding pact with her sister not to marry because marriage steals your ambitions and babies stunt your dreams. While Lucia and Marcus love each other, marriage in this world only leads to dysfunction and stagnation. And somehow, these kids still want in.

The tension between the races, along with the generational divide represented by the kids and the parents, is played to with good result. The Latino contingent are family oriented and the African American contingent are divorced and married to solitary lives—what this says about stereotypes is anyone’s guess. Dim but unobtrusive direction by Rick Famuyiwa lets us skate through some pretty terrible anti-comedy—the worst of which is the “climax” involving a goat and a bottle of Viagra. The brand of comedy is so broad that whatever bite the jokes could have is totally neutered (unlike the goat). But to be fair, maybe that’s just as well. Unless you think “Brick House” is High Art, you don’t go to a wedding looking for good music. Presumably then, it makes sense not to run to a wedding movie for edgy media. (They can’t all be Rachel Getting Married.) Still, beyond its overly-soft sensibilities and its humor that, at its best is gently amusing, it really hits its mark. It’s a consistent show of family support through the adversities of … family. It’s not toppling Father of the Bride for status in the canon of wedding movies but for a film that gently negotiates the tensions of family and race, it’s not too bad.