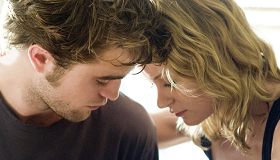 Drifting far from his Vampire mode in the Twilight films (but not too far), Robert Pattinson proves he doesn’t “suck” in a straight dramatic role and affectingly portrays a tortured young man with family issues who finds love with an equally wounded young woman in a romance underlined by past and impending tragedies. The name of Pattinson above the title will guarantee a large femme turnout for this brooding, PG13 drama, and although it’s no Rebel Without A Cause or Splendor In The Grass for a new generation, it has enough tender and genuine moments of youthful angst and romantic discovery that opening weekend figures should be sweet, word of mouth decent and a healthy afterlife on DVD assured.

Anyone longing to watch Pattinson do his best James Dean will see it in this deliberately paced story set in the summer of 2001. Pattinson plays Tyler Hawkins, a rebellious young man still haunted by the suicide of his older brother and constantly in battle with his wealthy, Wall Street lawyer dad (Pierce Brosnan). Dividing time between dealing with family problems, acting as big bro to 11 year old half-sister Caroline (Ruby Jerins) and living with his smart aleck roomie Aidan (Tate Ellington), Tyler is searching for a sense of himself. He supposedly goes to NYU but seems more intent on playing than studying, especially when he manages to hook up with a classmate, Ally (Emilie de Ravin), who just happens to be the only child of widowed police officer (Chris Cooper). The film’s opening flashback sequence shows an 11 year old Ally on a subway train platform as her mother is suddenly, brutally murdered and, like Tyler, she carries her own painful memories and demons into a new relationship that will change both in profound ways.

Love scenes are surprisingly reserved, probably to assure a PG 13 and instant access for Pattinson’s rabid, tween-heavy fan base, but the pair is instantly credible due to de Ravin (Lost) contributions. A tense restaurant dinner scene between them and Brosnan is nicely pitched and the conflicted journey to true feelings for the twosome rarely hits a false note.

Pattinson portrays the moody Tyler with admirable reserve and Dean-like ease. Despite wearing his demons on his sleeve he’s oddly likable, you root for him but don’t really know why. He’s matched perfectly by de Ravin as Ally, a girl who clearly has her hands full with this guy. It takes a little while to get used to Brosnan’s Brooklyn accent but he’s fine in his few scenes. Ruby Jerins is quite a live wire while Tate Ellington seems in for some ill-considered comic relief, at least in the first half. Chris Cooper is solid as usual, actually quite touching as a dad trying to hang on to the only family he has left.

For those looking for the rare romantic youth drama without vampyric overtones or other gimmicks, Remember Me should satisfy and it works as a much-needed change of pace for the talented Pattinson who remains one of the most watchable of our young stars.