close
A successful new take on a cult flick 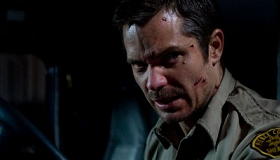 A reimagining of George Romero’s 1973 horror flick, The Crazies brings in contemporary themes of paranoia and bio-terror and updates them for a new generation to whom this sort of far-fetched premise holds some fear-based truth. A strange, unidentifiable toxin in a small Iowa town’s water supply quickly turns friends and neighbors into the equivalent of murderous zombies as the town’s residents become infected and go beserk. An entertaining fright movie that’s crazy fun and full of genuine scares, this shocker will have horror fans jumping out of their seats and lining up for a quick theatrical playoff followed by bountiful DVD returns and an afterlife as a possible cult favorite at midnight shows.

When a small town’s water supply is contaminated by a substance that turns its easy-going, uber-friendly residents into cold-blooded zombie-like killers, Sheriff David Dutton (Timothy Olyphant) and his pregnant wife, Judy (Rahda Mitchell), have to fight the battle of their lives as everyone around them succumbs to a toxic fate. Joined by his trigger-happy deputy, Russell (British actor Joe Anderson), and Becca (Danielle Panabaker), a medical center colleague of Judy’s, the group face long odds getting out alive. They suffer close calls from the likes of a pitchfork wielding madman, runaway buzzsaws, mild mannered folk who turn into gun toting, knife-throwing terrorists and what quickly becomes a town without pity. When the military invades, things get really hairy as the true facts of the town’s demise come to light and government involvement is suspected.

Director Brett Eisner and writers Scott Kosar and Ray Wright take Romero’s basic premise but give it a face-lift, turning it into a parable for our times. It’s still as silly as it was in 1973, but post 9/11 the whole thing seems a little more credible which helps makes this earnest remake entirely watchable. Dead-pan comic lines delivered by the straight-faced cast help, along with superior special effects and lots of explosions. Lots. A scene set in the medical center where one of the crazies holds the female staff hostage before picking them off one by one with a pitchfork is truly terrifying and so are other set pieces, including a nifty fight in a bedroom where Judy is tied up (that happens to her a lot in this picture).

The cast won’t be winning any Oscars for this but they nicely adapt to the mostly stereotypical roles you find in this sort of film. Olyphant is a dead-ringer for Josh Duhmel, in his straight-laced sheriff role. Mitchell is deliciously feisty as his wife, but stealing every scene he’s in is Anderson, a riot as the shoot-first-ask-questions-later deputy who more often than not enjoys taking matters into his own hands.

Obviously shot on a low budget, producers, which surprisingly include the message-heavy Participant Productions (An Inconvenient Truth), make the most with top-notch visual effects, great stunt work and ideas to chew on. Romero should be proud. The Crazies are new all over again.