close
Contrary to what you get out of the title, she never actually does…but still, we can wait and hope. 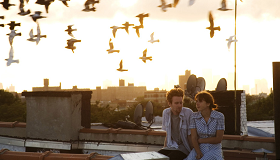 Writer/director Bradley Rust Gray relies too much on the talents and indescribable allure of pedigreed up-and-comer Zoe Kazan in his minimalist study of an epileptic coed at home on spring break. The glib response “Explode already!” stands, despite a few intriguingly tender moments within a narrative in which listlessness overwhelms incident. Along with Kazan, The Exploding Girl has a short running time to recommend it but is unlikely to catch fire even amongst cinephiles eager to discern Gray’s matrimonial and creative links to Treeless Mountain helmer So Yong Kim.

Kazan won the Best Actress prize at last year’s Tribeca Film Festival for her performance in the micro-budgeted indie, which Gray’s wife Kim co-produced and co-edited. And the ubiquitous thesp, granddaughter of director Elia, will be a plaudit contender for years to come on both stage and screen. She’s certainly an expressive performer and can slot into many different eras and genres, yet pinpointing the exact nature and source of her appeal is a challenge. Far from a conventional beauty, her sensually round face—large nose, huge eyes, small mouth and full cheeks—is simply a camera magnet. Gray does his best to see how far he can stretch that bond between lens and visage.

Kazan’s character, Ivy, attends college upstate and gets dropped off at her mother’s New York apartment in the early scenes. When her friend Al (Mark Rendall), who attends a different school, learns his parents rented out his room when he went away, he asks if he can stay with her. What follows is a desultory week in which the two hang while Ivy tries to stay in touch with her boyfriend from school, Greg, via cell phone. Most of her energy, or lack thereof, is aimed at preventing a seizure. The main trigger is stress, though she must also avoid alcohol and recreational drugs, which doesn’t make her the most stimulating girl in the city or, presumably, on campus.

She’s essentially alone. All her relationships are tentative and halting. Al starts to pull away and even her mother, a dance teacher, blows her off one night. A quotidian portrait of Ivy’s constricted situation, the movie is all about hints, feints, indirection and mixed messages. The audience waits for her collapse, more of an implosion really, with a growing sense of frustration and tedium. Our anticipation has more to do with the movie ending than any concern for Ivy. What’s nice is that this episode in her young life ends on a humane and upbeat emotional note.

New York City’s ambient noise serves as the soundtrack for The Exploding Girl. The idea of being disconnected and isolated in a world of instant communication is duly transmitted, with Gray asking the viewer to experience how it affects moods as well as corporeal states. Again, the problem is that it incites more impatience than sympathy. Underscoring the theme that meaningful emotional and physical connections are difficult, DP Eric Lin’s peek-a-boo camerawork alternates between close-ups and long shots obscured by whatever happens to cross between him and his subjects.

Having tailored the script to his two leads, Gray idealizes Ivy’s condition—perhaps enthralled by Kazan—and appears to revere the character. He doesn’t want to acknowledge that her condition and its accompanying sense of abandonment and displacement might not always lead to positive behavior. There’s a darker interpretation. Although you can feel sorry for Ivy, you also suspect she’s being manipulative and passive-aggressive as she somatizes her anxiety. Her equanimity and calmness comes off as needy and self-pitying. What Gray sees as her stoicism can read as passive-aggressive, even masochistic. Not to be callous, but it’s unclear which came first—Ivy’s epilepsy or her ennui.

Further exploration of this psychological question might have made for a more substantial, less enervating artfilm. One less liable to be experienced as an approximation of cinematic waterboarding.