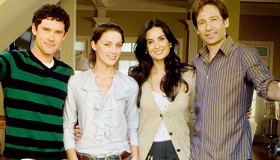 The idea of an ad man turned filmmaker satirizing his longtime profession is fascinating as behind-the-scenes gossip. That first-time writer/director Derrick Borte started his creative life as a graphic artist for the surf and skater company Billabong and a director of commercials means little to audiences attracted to his dark comedy The Joneses and its one-in-a-million casting of David Duchovny and Demi Moore. Still, Borte understands the big-money world of consumer goods marketing and the seductive, secret ad pitch. That's how he was able to dream up the ultra high concept of the attractive, affluent suburban Jones family as hired guns for a viral marketing firm. Borte supports his jewel of a story idea with dead-on casting, stunning images and product placement that's intentionally heavy-handed. Granted, the storytelling skips a beat near its climax but that's to be expected with a first-time filmmaker. The Joneses is a slick, strong debut for Borte. For specialty distributor Roadside Attractions, which picked up U.S. distribution rights for the film following its premiere at the 2009 Toronto International Film Festival, The Joneses has enough commercial appeal to become the rare arthouse release that crosses over to mainstream audiences. Its anti-consumer theme is certainly in-sync with many recession-wary moviegoers cutting back on consumer spending.

Keeping up with the Jones turns frighteningly literal for suburban couple Larry (Gary Cole) and his pampered wife, Summer (Glenne Headly), when Steve and Kate Jones (Duchovny and Moore), and their grown children Jenn (Amber Heard) and Mick (Ben Hollingsworth), move nearby. The Joneses are trendsetters who have the best of everything, from golf clubs to frozen appetizers. Larry struggles to match his neighbors' spending but they're not really ordinary neighbors. Intentionally placed in their Anywhere, USA McMansion and paid handsomely to "play" family, the Jones are viral marketers paid to promote clients' goods to their unsuspecting friends and neighbors. It's a tried-and-true system until Mr. Jones decides he doesn't want to keep living a lie with Mrs. Jones.

Duchovny is likable and easygoing as the secret salesman who decides he wants out, the slowly forming moral compass of the movie. Moore puts her toned figure and unexpressive face to good use as the icy professional in charge of the Jones team. Her dedication to the business is never in question. Young faces Amber Heard (Zombieland) and Ben Hollingsworth (TV's The Beautiful Life) complement Moore and Duchovny, but their subplots involving an affair with a married neighbor and a closeted homosexual fail to support the core storytelling. On the supporting side, Gary Cole plays a class-driven country clubber to perfection and Lauren Hutton makes the most of her brief appearances as the boss who employs all The Joneses (and other make-believe families like them).

It's to be expected that the debut feature from a veteran designer and commercials director would dazzle and Borte does not disappoint. Working with cameraman Yaron Orbach, production designer Kristi Zea and art director Paul Kelly, Borte takes full advantage of his suburban Atlanta locations. The first-time feature filmmaker also makes full use of his cast, especially Moore who gives her best performance in years.

Adapting a story by Randy T. Dinzler, Borte fumbles with a sentimental climax that feels artificial (very un-Jones-like). While the hit-and-miss storytelling may cost Borte some critical word of mouth, his picture perfect cast and timely anti-consumerism topic will help attract audiences when Roadside Attractions opens the film in mid April. Considered one of the more audience friendly films when it premiered last fall in Toronto, The Joneses now has the chance to prove its trendsetting appeal, that is, if the ad pitch behind the movie is persuasive.