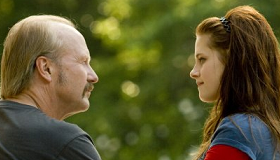 A laconic, late-middle-aged dude fresh from the slammer, a coltish runaway and an oddball adolescent take a road trip through Louisiana in The Yellow Handkerchief. From a Pete Hamill story, the romantic drama earns solid marks for atmosphere, moving shots of post-Katrina New Orleans and acting—few do sad-and-wise better than William Hurt—but each theme is hit a bit too hard and predictably. Twiheads will note Kristen Stewart’s presence and are of the generation that will determine whether Eddie Redmayne’s career flourishes; yet it’s their elders who’ll be drawn by Hamill and Hurt, which doesn’t augur well for the movie’s earning potential in any format.

Shot in 2007, The Yellow Handkerchief is an example of a literary adaptation that keeps its ambitions in check and doesn’t overreach. This quality seems attributable to the aesthetic decisions taken as much as to budgetary constraints. Director Udayan Prasad and writer Erin Dignam have fashioned a modest, poignant film from Hamill’s short story, published in 1971. Being set in a storm-ravaged landscape and having four fine performers on board adds timbre. An upbeat ending will earn it points with those susceptible to romantic tearjerkers and anyone tired of depressing news.

Sporting extra poundage and a tremendous mustache, “Master of Numb” Hurt plays Brett, an intensely forlorn guy with no one to meet him on his release from prison. All that waits is a long and empty road. Is he a hardened criminal—a child molester perhaps? Curiosity is piqued. His uneasiness makes the viewer uneasy. Yet it quickly becomes clear that, while shell-shocked by life, Brett is in control to the extent that he’s certain about his only potential source of calm.

Sitting in a small-town café, he watches the locals. 15 year old Martine (Stewart) gets dissed by her boyfriend and then a kid named Gordy (Redmayne) makes an awkward attempt to pick her up. A bit later, she decides to run away and it so happens Gordy has a jalopy at the ready. He’s been wandering through the South, following the river post-Katrina. Reluctantly she hops in and Brett, also in need of a ride, joins them. The trio sets out across the river on a ferry, rushing to put up the convertible’s top when a sudden rainsquall hits.

Flashbacks to Brett’s steamy and turbulent romance with boatyard owner May (played by Maria Bello) are intercut with their journey. Brett schools the kids on love, fate and the importance of making wise decisions no matter how many bad ones you’ve already made. As he begins to open up, we learn what led to his incarceration and, after a few diversions, the story heads toward his possible reunion with May.

All four performers excel at revealing the often-awkward, sensual side of their characters; the mossy sexual tension is palpable. Brit Redmayne does a fine job with a difficult role—a borderline idiot savant, a goofball with a gift for fixing all things mechanical. Stewart’s earthy vulnerability matches May to a tee.

The film’s lyricism can be chalked up to the lensing of Chris Menges more than to the twangy soundtrack. Transitions between Brett’s back-story and the road trip are smoothly handled, making this a rare case in which the flashback device is employed to natural effect. The weakness of The Yellow Handkerchief is that the characters tend to spell everything out in over-determined dialogue. There’s a tidiness that rubs against the disrupted environment and aura of dislocation. You get the impression every oak tree spied by Menges’ camera and every word uttered has been calculated and re-calculated to illustrate the theme that it’s never too early or too late to be made whole.