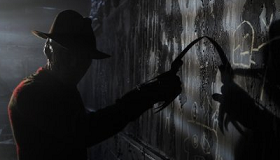 After filmgoers have endured eight previous encounters with dream stalker Freddy Krueger (the last in 2003’s Freddy Vs. Jason), Michael Bay’s Platinum Dunes Production Company, which previously resurrected The Texas Chainsaw Massacre, Friday the 13th and The Amityville Horror has now returned to square one with this remake of the 1984 original A Nightmare On Elm Street. But other than replacing Robert Englund with a younger Freddy (Jackie Earle Haley) the basic feeling you get out of this version is ‘been there-done that.’ With the usual requisite number of teen killings and a backstory explaining how this demon got that way there’s really no good reason to remake it except for a quick box office haul from a generation too young to catch Freddy mania in theaters the first eight times around (and maybe a few leftover horror fans who just can’t get enough of this monster). Expect a fairly decent first weekend before word gets out there’s nothing much new happening on Elm Street and it quickly lands on Netflix queues.

The feature directorial debut of 48 year old music video maestro and commercial wizard Samuel Bayer, Nightmare’s opening scenes establish a familiar scenario as Freddy starts haunting the dreams of a group of high school friends who quickly discover they are going to become victims if they dare to fall asleep. The core group, Nancy (Rooney Mara), Kris (Katie Cassidy), Quentin (Kyle Gallner), Jesse (Thomas Dekker) and Dean (Kellan Lutz) all live on Elm Street and they are all having the same basic dream. In predictable fashion, the characters are done in one-by-one by their worst nightmares and the ethereal presence of one, Mr. Krueger. Nancy, a waitress at the local diner, takes it upon herself to get to the bottom of things when she discovers the link between the dreams is a shared elementary school where young Freddy was a maintenance man who molested them as kids. The flashbacks detail how Freddy was burned to a crisp by vigilante parents, but now, years later, Freddy returns in the dreams of these students to wreak his own revenge. Helped by nerve-rattled, pill popping Quentin (who is embarrassingly forced to spend a good deal of his screen time in a speedo), Nancy faces her fears heading for the inevitable showdown.

New technology is a good excuse for remaking films these days but surprisingly this Nightmare really isn’t even as technically effective as Wes Craven’s 26 year old original. There are updated homages to Craven’s special effects but other than the usual heightened sound cues and sudden character entrances this version is strictly ho-hum in the scares department. And although much screen time is devoted to helping us “understand” Freddy’s motivations, the child molesting angle is just too creepy for comfort and deflates the movie’s “fun” factor considerably.

The acting is serviceable but predictable, with stereotypical turns by both teens and parental figures. Only Mara and Gallner, particularly in a very funny encounter with a no-nonsense pharmacist, get much of a chance to do more than look afraid. It’s up to Haley to keep us intrigued with this reboot however, and he does the best he can, buried under the Freddy guise and an electronically deepened speaking voice. Jackie, who was Oscar nominated for playing an accused child molester in Little Children, might want to consider a different type of role in the future