close
Making Avatar is hard. Making The Room is harder. 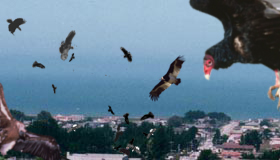 The only movie event more impossible to make than a visual revolution is a grassroots, cult classic. Neither can be faked and both are more rare than an eclipse. But for the cost of Avatar you could shoot 35,000 Birdemics, the $10,000 Hitchcock homage (not spoof) storming midnight movie screenings led by writer/director James Nguyen. That Nguyen brandishes a wire hanger (the new Tommy Wiseau spoon, or Rocky Horror rice) means he's catching up to the joke, but that he's selling out showings of a genuinely terrible film also means the joke is on us. With hipster comedians Tim & Eric and the Internet on its side, Birdemic will storm 2010, but needs to prove it's not a fly-by-night fad.

You don't watch Birdemic for the plot, but here it is: a Bay Area salesman named Rod (Alan Bagh) snags a date with his former high school classmate-turned-model, Nathalie (Whitney Moore). At a cozy strip mall restaurant they toast that day's successes: she's shot a cover for Victoria's Secret (in a strip mall) and he's made a million dollar deal. (Literally, one million dollars.) But their second date goes oh-so-right and oh-so-wrong. They consummate their insta-love and wake up to find they're under attack from eagles—venom-spitting eagles who, like kamikaze pilots, explode on impact.

And here's where the movie gets good. Or bad. Well, both.

Nguyen has confessed that he hired a student computer animator, Yeung Chan, to animate his first killer bird sequence for a down payment of $100. (In the opening credits, Yeung Chan gets a burst of applause. Notably not in the credits is a biologist.) The eagles, along with vultures that look like black eagles, are as 2D as a sticker and they hover, screeching, in front of our heroes who try very, very hard to pretend that something is there. (For first time actors, they pretend okay.) Sure, these angry avians spit venom and spontaneously blow up, but what they can't actually do, given Nguyen and Chan's limitations, is attack. To play fair, Rod and friend Ramsey (Adam Sessa) have guns that they can't shoot—however, they've got an unlimited supply of bullets that fire with a nifty puff of animated smoke like a Dick Tracy comic.

What is Birdemic. trying to say? Actually, a lot. Nguyen stuffs his nest with his pro-peace, pro-green message, decrying the global warming that has caused eagles to mutate with fury and flammability, giving a shout-out to An Inconvenient Truth as a great first date flick and promoting Yoko Ono's website, ImaginePeace.com.

More importantly: what are we trying to say by fete-ing it? Birdemic doesn't have a story, doesn't have actors, doesn't have looks, doesn't have skill. But it has craft. Nguyen's DIY-fingerprints are on every frame. Like The Room, it's the antidote to mass culture--a singular auteur with a dream. And if it had been focus-grouped (or even had collaboration), it would have crumbled apart in pre-production. Wiseau and Nguyen were both born outside the States, dodging Hollywood inoculation, and it's their earnest disregard of Hollywood rules about sound design, sets, lighting and editing--coupled with their fervent belief that their work does stand up to the studios--that's catnip to cult fans. Most bad films die unseen. A few are good once for a laugh. But the hapless directors who have cult thrust upon them have created accidental comedic brilliance--for them, there's no greater reward than audiences spinning it into an interactive repeat event, and nothing more slanderous than "Fake!"

Avatar proved we love flash. But in this same decade, we've seen the ascent of the craft fair aesthetic, a love for the one-of-a-kind creation, however flawed, be it stitched-felt stuffed animals or the Deer Wars in Jared Hess' otherwise execrable Gentlemen Broncos. Irony isn't dead, but panting alongside it is the New Sincerity. We're laughing at Nguyen's budget barn special effects, but we can't laugh at the fact that he set out to make the movie of his dreams--and he did it. And then he spent two years hustling just to get people to see it. And if we leave Birdemic blanketed in smug knowingness, then the joke is us.