close
The art is magnificent but the comedy inconsistent 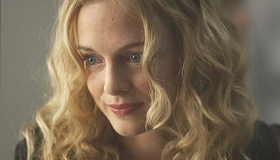 Duncan Ward is an acclaimed theater director and documentary filmmaker but it's arguably his role as husband to art curator Mollie Dent-Brocklehurst that best prepares him for the art world comedy Boogie Woogie. Set amongst London's stylish Cork Street galleries, Boogie Woogie is a poorly drawn adaptation of Danny Moynihan's 2000 novel of the same name, (flipping the book's New York setting for London), in which artists, their wealthy patrons, gallery owners, staff and artists' reps crisscross in a crazed manner reminiscent of a Robert Altman comedy. It's also worth noting that Moynihan, who adapted his own novel for the film, is a painter, gallery curator and longtime friend to artist Damien Hirst. Ward and Moynihan's deep ties to the international art scene help explain why Hirst and numerous London-based artists lent their paintings and sculptures to the production. Boogie Woogie may be the most well connected comedy in years—although many of the artists featured will probably experience remorse after watching the haphazard results. IFC Films, which acquired Boogie Woogie in February 2010 long after its debut at the Edinburgh Film Festival, debuts the comedy in U.S. arthouses April 23 with a simultaneous VOD release. Its impressive ensemble cast featuring Stellan Skarsgård, Heather Graham and Charlotte Rampling among others, as well as the sexy backdrop of London's gallery scene will help attract extra attention to the IFC release, but poor word of mouth will dampen any chance at sizable earnings.

As is frequently the case with ensembles, some of the players stand out while others languish onscreen. Stellan Skarsgård is perfectly arrogant as the affluent collector, Maclestone, but Gillian Anderson stumbles over her stiff English accent as Maclestone's unhappy wife, Jean. Danny Huston offers little but energetic chuckling as the backstabbing gallery owner. Heather Graham fares better as his ambitious gallery assistant. In fact, Graham turns out to be the film's most stable character, the one capable of supporting all the craziness. Jaime Winstone, a newcomer to U.S. moviegoers but something of a celebrity in her native England, is believable as the self-serving video artist Elaine. Still, no breakout performance can salvage the film's overly melodramatic finish.

Cinematographer John Mathieson (DP for the upcoming Robin Hood) makes beautiful use of the sleek gallery spaces. Editor Kant Pan keeps the crisscrossing storylines coherent. The players look hip thanks to costume designer Claire Anderson. The film's standout contribution belongs to artist Damien Hirst for curating the artwork in the movie and supplying 25 of his Biopsy paintings for a major scene.

To call Boogie Woogie a Robert Altman-inspired collection of intersecting stories would purely be done for the sake of description since it lacks the creative spark and dramatic heft of Altman's best ensemble comedies. Ward has the technical skills needed to make feature films but displays little knack for comedy. Moynihan may be an insider when it comes to the international art world but fails to deliver laughs when the film needs them most.