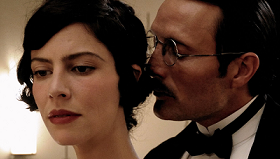 After a dignified gap between Coco avant Chanel (Anne Fontaine’s take on the fashion icon with Audrey Tautou) comes an exploration of one of her tempestuous affairs with the Russian composer, Igor Stravinsky. Perhaps Fontaine’s film will give added box office impetus to this completely different period of Chanel’s life, rather than simply scrabbling for the same audience that sought out the earlier released biopic. Upscale fashionistas will swoon and suitable box office draw will follow.

A sumptuous recreation of 1920s France and the unbridled affair between two of the century's most iconic figures should provide an irresistible combination for any filmmaker worth his salt. Jan Kounen, who cut his directorial teeth on the hyper violent Doberman, responds to the change of pace as he charts how art and culture, style and genius made the sparks fly in the heady encounter between Coco Chanel and Igor Stravinsky.

They met and loved each other only for a few madly passionate moments before going their separate ways to become legendary figures in their own fields. Kounen certainly captures the measure of their affair in this stylized film that actively avoids the traditional biopic formula that Fontaine preferred in her Chanel film.

Besides giving a fascinating portrait of these two creative souls, often in torment, it also delivers a wider horizon on a fertile period of creativity in Europe. Mads Mikkelsen as Igor embodies to perfection a man of refined Russian dignity and brooding artistic temperament just at the time when his revolutionary evocation of The Rite of Spring was about to be performed.

It’s not always easy to capture a genius at work, but here Kounen succeeds. You feel the composer’s bursts of inspiration as he scribbles furiously and the sheer joy when he hits gold.

Anna Mouglalis' Coco may not resemble her in stature (the actress is statuesque while Chanel was petite) but her cool and elegant allure seems entirely appropriate and her reserves of conviction, determination and meticulous attention to detail shine through.
No wonder the two of them shared such passionate moments. Both came to their respective arts with exactly the same precision and clarity of thought.

No one could possibly feel short-changed with this sumptuous visual feast, the authentic recreation of period and the subtle score by Gabriel Yared.