close
A symphony of bad CGI and even worse jokes 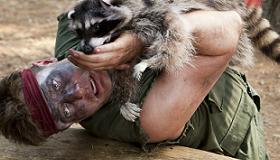 Brendan Fraser is a likeable, rubber-featured comedian, whose timing and facility with a pratfall has made him a go-to guy for kiddie flicks ever since donning a loincloth for 1997's George of the Jungle. But his amiable screen presence is not enough to salvage Furry Vengeance, the actor's latest misadventure in family entertainment. The story of a real estate developer who faces the fury of woodland creatures when they discover their forest homes are about to be bulldozed to make way for suburbia is simply dire. With little competition out there for the family dollar (how many times can someone see How to Train Your Dragon?) the movie will prosper at the box office. With Hollywood's mania for sequels, a box office success will no doubt lead to Furry Vengeance II and that is a tragedy.

Neither his schoolteacher wife Tammy (an uncomfortable Brooke Shields) nor his surly teenage son Tyler (Matt Prokop) are happy that Dan Sanders (Fraser) has uprooted them from Chicago to the woods, while the subdivision arises around their model home. But Dan is nothing if not an eager corporate toadie to his boss, Neal Lyman (Ken Jeong), going so far as to believe the transparent lie that their company is "eco-friendly." The forest denizens, led by a crafty raccoon, are smarter than that and so determined to keep their homes they declare war on Dan, using whatever natural weapons are at their disposal. Boulders, water, bird dung and eau de squirrel are among the armaments of choice as they reduce Dan to quivering jelly, making him look crazy in the process.

The model for this mess seems to be the 1994 Studio Ghibli anime feature Pom Poko, in which raccoons with huge testicles invade a Tokyo suburb in order to save their own turf. But screenwriters Michael Karnes and Josh Gilbert have replaced that movie's wit with gross-out humor and feeble jokes that fall flat. The CGI employed to give human expressions to the animals is simply ghastly. A raccoon with a rictus for a smile does not belong in a children's film, but a horror movie. The movie's simple-minded lesson that forests are good and development is bad is undercut the minute one pauses to think about how many natural resources were wasted on this sorry excuse for a motion picture.

Fraser, so good in Gods and Monsters, The Quiet American and even children's fare like the aforementioned George of the Jungle and Looney Tunes: Back in Action deserves better than this obnoxious drivel. So does the family audience.