close
A painterly approach to a gangster uprising 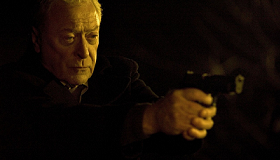 An old-fashioned vigilante revenge drama burnished with artfilm sensibilities and a classicist’s attention to detail, Harry Brown is a triumph of both technique and substance. Infused with a transformative, invigorating blend of old and new—the seasoned experience of Michael Caine and the exhilarating artistry of debut director Daniel Barber—this exceptionally strong British indie looks to provide languishing Samuel Goldwyn Films just the right crossover vehicle to nudge itself back into contention in the dwindling indie distribution marketplace.

At its most basic, Harry Brown is a genre film not terribly far removed from such vigilante revenge classics as Death Wish, Mad Max, Taken, Taxi Driver or even the more elevated tenor of Gran Torino, a likelier comparison given the age factor of the two films’ stars. A widowed ex-marine simply trying to live out his days in peace, Harry (Caine) finds that peace increasingly disrupted by the growing intrusion of drug-fueled violence and crime in his once-tranquil London neighborhood. But when his best friend turns up dead, seemingly murdered by a pack of youths he had dared to confront, Harry elects to take matters into his own hands.

In fairness, there’s a great deal more depth to Gary Young’s script than this skeletal description suggests—the crippling vagaries of British politics, the more universal dilemma of reverse gentrification and a very stark consideration of aging and loneliness in the face of an inconsiderate society all factor into a narrative that is far more intelligent and thoughtful than its obvious forebears. But those considerations still can’t do justice to the end result which, in Barber’s very capable hands, emerges as an almost poetic study of one man’s struggle with the shifting, unpredictable tides of modern-day morality and justice.

Though this is technically Barber’s debut film, there’s nothing novice in the filmmaker’s technique. A veteran graphic designer and successful commercial director in his native UK, Barber first captured broader attention with the 2007 Oscar-nominated short The Tonto Woman. Here he exhibits a patience and passion for detail typically associated with the artfilms of French cineastes like Eric Rohmer. Eschewing the ratcheted pace with which such pictures are typically fueled, Barber instead chooses to linger on the moments, faces and landscapes that matter—urging the audience to engage a higher range of emotions than a simple knee-jerk urge for justice at all costs. It’s a painterly approach to an otherwise comic book premise and Michael Caine’s remarkable, timeless face offers us an agent of empathy that provokes more than it satisfies, thus this film is less escapist catharsis than a clarion cry to civic action.

It’s becoming redundant to declare each successive Caine performance “among the best of his career,” even when it’s true. That Caine is one of the cinema’s greatest living treasures is a statement of fact few would dispute—his timing, delivery and body language represent a second layer of authorship, communicating an added compendium of thoughts, themes and emotions with which to connect the audience to the film. It is, quite simply, a marvel and a joy to behold.

Not to be overlooked are the film’s wealth of fine supporting performances and technical contributions—the always wonderful Emily Mortimer, Martin Ruhe’s extraordinary cinematography and Kave Quinn’s incisive production design each playing a part in what must be considered one of the very best films of the first half of 2010.