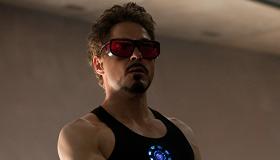 Let the summer begin! Iron Man 2, the sequel to 2008’s Marvel blockbuster (which grossed over $570 million worldwide), is a sensational way to give the season a kick start. This follow-up has a lot on its plate, with Robert Downey Jr.’s Tony Stark now outed globally as Iron Man and an array of new villains coming out of the woodwork to compete with him. It may not be in 3D but look for this 2nd visit to Marvel’s latest cash cow to top the original, not only for ratcheted up action, excitement and pure movie fun but also at the box office and beyond.

The new film picks up about six months after Tony Stark revealed his top secret Iron Man identity to the world. Now with incredible fame, the billionaire playboy/weapons inventor/superhero is trying to relaunch his late father’s (John Slattery) Stark Expo, an event that focuses on the humanitarian aspects of revolutionary technology. Unfortunately for him, the U.S. Government wants him to turn the Expo over to the military and has called him to a Senate hearing to try to force the issue.

A new rival from his darker past, Russian prisoner Ivan Vanko a.k.a. Whiplash (Mickey Rourke), is determined to crush Tony by unveiling his own super weapon, which just happens to be inspired by Stark’s premier invention. If that’s not enough, he’s got to deal with all sorts of new challenges including one from a his sleazoid rival Justin Hammer (Sam Rockwell), who is determined to get the U.S. contract for his own weaponry and dunk Stark industries in the process. Stark’s seductive new assistant, Natalie (Scarlett Johansson), is a super spy with the altar-ego Black Widow and she’s has been installed as a mole in Tony’s operation. Returning from the first film is a feistier Lt. Col James “Rhodey” Rhodes (Don Cheadle) and later on Nick Fury (Samuel L. Jackson) with some key information for our conflicted hero.

Director Jon Favreau and new screenwriter Justin Theroux (Tropic Thunder) deftly manage to juggle all these interweaving parts without succumbing to the sophomore slump many comic book franchises suffer. Although the addition of a trio of new villains may seem like overkill, Favreau keeps it all balanced and really pulls off some tremendous set pieces including a spectacular Monte Carlo Grand Prix where Tony is one-upped by the Godzilla-like tactics of Whiplash and narrowly escapes alive. The half hour finale is also loaded-for-bear with dizzying non-stop effects and action incorporating not one but two Iron Men.

As he was the first time around, Downey Jr. is the man! Taking on the mantle of a comic book hero after age 40 is unusual but Downey makes it palatable. Gwyneth Paltrow returns nicely as the ever-faithful Pepper, who is now running the company and trying to keep Tony out of trouble. Cheadle ably replaces Terrence Howard as Rhodey and gets his own “Iron Man” moment, while Slattery has a key flashback cameo as the elder Stark. As one of the new villains, Johansson oozes sex appeal and shows she has a natural flair for martial arts. Meanwhile the tattooed and imposing Rourke is a hoot with thick Russian accent and a penchant for pet birds. Best of all is Rockwell who plays the low-rent rival of Stark to the hilt, particularly in the opening Senate hearing where he tries to unsuccessfully squash his arrogant competitor. Comedian Gary Shandling has an amusing cameo as the frustrated Senator also trying to nail Stark.

Fans of the first will not be bored. This Iron Man may not be the Godfather II of comic book movie sequels, but it is a complete blast.