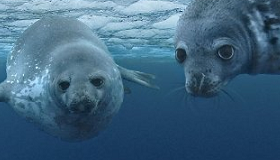 Oceans, Disneynature’s second in a yearly series of nature documentaries, hits screens on Earth Day. Doc should find even more success than its predecessor, Earth, did last year. Earth eventually earned over $30 million domestically and was a worldwide success, a feat for the doc genre. Narrated by Pierce Brosnan, Oceans is simply amazing at times, a truly remarkable and extraordinary journey under the sea that takes us places we have never been before. Audiences are bound to marvel at what directors Jacques Perrin and Jacques Cluzaud have managed to get on screen, so results should be sweet at the box office, and at other ancillary markets. Disney is donating a portion of the first week’s receipts toward efforts to save the oceans.

Ordering up a program of at least five new feature-length films to be individually released each Earth Day, Disney executives have smartly sought out the world’s greatest nature filmmakers, and those filmmakers—certainly in the case of Oceans—have exceeded expectations. Using the latest in underwater technology Perrin and Cluzaud put us right in the center of the action, gaining stunning access to all variety of sea life as their cameras carry us along with schools of dolphins, killer sharks and whales, struggling sea lions and so many others. Covering all five of the world’s oceans over the course of four years, the directors meet their goals in putting the viewer right in the picture and taking him straight down to the bottom of the sea. Like they did for birds in Winged Migration, Perrin and Cluzaud are able to also tell a mind-blowing story and get us right to heart of what makes these incredible creatures tick. It literally appears as if no rock is unturned by their cameras as they capture all sorts of interesting characters, from hammerhead sharks and porcupine fish, to white eyed moray and leatherback turtles, to a colorfully dazzling creature known simply as a Spanish Dancer. Along the way, there are so many endless varieties of undersea life on display its hard to keep them all straight, although the filmmakers’ sharp and witty script, beautifully narrated by Brosnan, goes a long way in doing just that.

Certainly this material has been covered well before by the likes of famed oceanographer Jacques Cousteau and others, but Perrin and Cluzaud benefit greatly from new modern technology that seems to open up the sea in ways we’ve never experienced. This includes the use of camera equipment called “rebreathers” that cause minimal distraction, so it appears the sea life is not even aware there are intruders photographing their every movement. One scene has a camera placed somehow right in the middle of a group of spinning dolphins that simply has to be seen to be believed. Using digital equipment they were able to spend 45 minutes under water at a time, this is opposed to the maximum of six minutes that was previously achieved with 35mm cameras. The difference is apparent.