close
This plot's thin as... 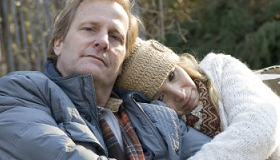 This well-intended but not altogether successful, quirky character piece finds Jeff Daniels in a dour mood, playing a failed, middle-aged novelist. Richard (Daniels) is seeking inspiration and happiness so he moves to a Long Island beach community for the winter where he forms an unusual friendship with a troubled teenager. After serving as the opening night film for the Los Angeles Film Festival last June, Paper Man finally found a small distributor and will get a limited release that should land it in and out of theatres quickly. Too introverted and gimmicky for its own good, the film’s best bet for any financial success is among Daniels fans, however even they might find this effort too similar to his 2008 box office flop, The Answer Man, in which he also played a self-obsessed writer.

With his marriage strained and ideas at a premium, Richard, takes the suggestion of his career-oriented wife, Claire (Lisa Kudrow), and moves to a Long Island Beach community for the winter to overcome his writer’s block. There he meets a rather shy teen, Abby (Emma Stone), who he hires to babysit once a week even though he and his wife have no children. (It’s that kind of movie, folks.) Over the course of the winter Richard and Abby talk (and talk and talk) about things. He likes her soup. She likes the way his book about an extinct chicken is coming along and she inspires him to take up the art of Origami. In a fit of artistic inspiration he moves all of the furniture out on to the lawn and creates a new couch with hardcover copies of his first novel. What Richard and Abby also have in common are imaginary friends, and they talk to those make-believe pals throughout the film. For Richard, it‘s a superhero named Captain Excellent (Ryan Reynolds) who’s been in his head since childhood. For Abby, it’s a depressing boy named Christopher (Kieran Culkin) who is obsessed with her. The reasons for her descent into a fantasy relationship become apparent when its revealed she feels she played a part in the accidental death of her twin sister years earlier. As this unique relationship between the pair continues complications arise, but both emerges a better person.

Daniels, one of our most underrated of actors, seems to be attracted to quirky indie projects like Paper Man of late and it’s easy to see why: despite the fact he always delivers, Hollywood has never really known what to do with him. His character, Richard, will unfortunately be tough for anyone to fully identify with, but Daniels makes the best of it and does have some touching moments opposite Stone, who does what she can with the underwritten Abby. As their fantasy counterparts, a newly-blonde Reynolds tries for laughs but only comes off as ridiculous in his caped appearances, while Culkin is just so damned depressing. Kudrow isn’t in it much but she’s a welcome presence when she’s around.

Husband and wife writing/directing team Kieran and Michele Mulroney just can’t seem to get a handle on this fragile, goofy idea that might have worked better with more capable filmmakers. Or maybe not.