close
CBS sends another Movie of the Week into theaters, but presence of the mother-of-twins Jennifer Lopez makes it all seem like news 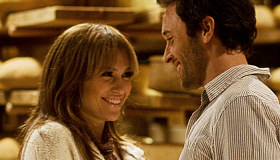 Although it’s formulaic in the extreme, The Back-up Plan is an easygoing romantic comedy treat for fans of Jennifer Lopez. After a family inspired hiatus, Lopez returns to the genre in fine form, lighting up the screen as a wannabe mother who has given up waiting for the “right guy” and finds herself pregnant through insemination on the very day she finally meets Mr. Perfect. The curiosity of seeing Lopez, a recent real-life mother of twins, playing a character with maternal urges onscreen should spark some decent numbers from the targeted female audience for nascent CBS Films. Right now, CBS is hoping for anything better than the dismal box office generated by their debut offering, Extraordinary Measures in February.

Take Lopez out of it and it would be hard to identify this hardcore chick flick as anything other than a CBS Movie of the Week. No wonder (CBS Chair) Leslie Moonves warmed to the story of Zoe (Lopez), a romantically frustrated pet store owner with no prospects for a serious relationship. Zoe decides get pregnant with the help of a doctor (Robert Klein) and moments later meets cute with Stan (Alex O’Loughlin), the two fighting for the same cab. Of course we know this adversarial relationship won’t last for long as Stan pursues Zoe with a vengeance and the courtship of her dreams begins, but soon the relationship grows more complicated when she discovers the medically induced pregnancy was an instant success. For fear of losing Mr. Right she keeps it a secret but finally comes clean—he was bound to figure it out eventually. After the initial shock he decides he’s in it for the long haul, even when it’s revealed she’s carrying twins. Typically for this genre, all good things must come to a fork in the road and the pressure of impending parenthood on a pair who barely knows each other takes its toll and they split up but then…well, take a guess.

In movies as diverse (NOT!) as Maid In Manhattan, The Wedding Planner and Monster-In-Law Lopez has proven she knows her way around this stuff and she’s terrific here as a conflicted woman determined to be a mom one way or another. O’Loughlin, (TV’s Three Rivers) is a good choice for the leading man. He exhibits a natural screen presence that bodes well for a movie star in the making, although the little-known (at least in theaters) Australian native’s name above the title probably won’t help box office. Other former TV stars, Linda Lavin (Alice) and Tom Bosley (Happy Days) turn up to offer advice along with comics Michaela Watkins and Anthony Anderson. Also of note is Zoe’s cute dog, a handicapped pooch that rolls around the apartment with a makeshift pair of wheels for his hind legs.

Unfortunately having Zoe join a single mothers support group is a misguided script contrivance that gets way overblown by director Alan Poul. The group is led by another TV vet, Melissa McCarthy (Samnatha Who?), who mugs her way through a couple of scenes that desperately try to get laughs where none exist. This part is when you should go out for popcorn.