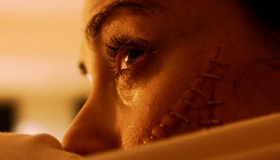 What's worse than death? Dr. Heiter. Sibling cinema act Tom and Ilona Six introduce the new face of violence—or, at least, vomit—in this essentially four-character horror flick about a German surgeon who sews together three tourists. More of a stunt than a script, The Human Centipede (First Sequence) should get a modest amount of I-dare-you ticket sales, but it's about as mass market as a dogfight.

At least you can't say the Sixes don't deliver with panache. We first meet the good doctor (Dieter Laser), an expert in Siamese twin separation, in a truck trolling for his first patient. In his hand he clutches a photo of what looks like a chain of three dobermans sniffing each other nose to end. Later, we learn that his beloved “3-hund” was in fact sewn mouth-to-anus and linked via one gastric system. And with his favorite pet in the grave (we're not certain of the cause, but we're darned sure of the catalyst), like God with Adam, he's charged himself to mold a new one from human clay. His raw materials: two bubbly American co-eds (Ashlynn Yennie and Ashley C. Williams) and a Japanese punk (Akihiro Kitamura).

Does he succeed? Yes. Do we see it? Yes. Do we want to? There must be a reason you bought the ticket. It's certainly not the dialogue. Dr. Heiter's the silent type—he's so disinterested in conversation he puts Katsuro the Japanese-speaker in the front. After the dastardly operation is unveiled, we hear nothing from the girls but whimpers (“I should have cut your vocal cords,” he snarls). The schlock humor of the first scenes is replaced with squirms—it's as painful as you're picturing and possibly worse.

Mind you, it's masterfully handled. Like the doctor himself, writer-director Tom Six knows how to splice his work together. The first half is excruciatingly tense. A brief escape from Heiter's basement laboratory is mercilessly well paced. And Dieter Laser is a find: he's got such an alien presence, he makes Christopher Walken look like Justin Bieber. He moves like a predatory eagle, utterly unruffled by pain. You can't take your eyes off of him, even when he's whipping his creation and ordering Katsuro to “Feed her! Feed her!” (Imagine that.) But part of his allure is misdirection: you don't want to look at the human centipede for long and what else is there onscreen? And after the shock wears off (okay, it never wears off that much) there's nothing to see but two sets of cheeks slashed and stitched into a joker's smile and three pairs of screaming eyes.