close
It could have been called The B-Team. 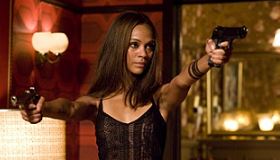 The Losers not only looks like a low rent, buttoned-down version of The A-Team, (that iconic TV series and anticipated summer blockbuster) but it also resembles a hybrid of other flicks like Mission: Impossible and Inglourious Basterds. Still, this frenetic, all-stops-out action flick about members of an elite Special Forces unit on a Bolivian “search and destroy” mission has its own charms, (if that’s the right word). It should hit the young male demo starved for action right where it counts. Expect initial box office to rival other similar successes from producer Joel Silver and his Dark Castle label. However, drop off will be quick and international prospects a bit more likely to hit recoupment for distributor Warner Bros. If it surprises with bigger numbers, expect lots of sequels.

Based on the DC/Vertigo comic book successes by Andy Diggle, Peter Berg and James Vanderbilt’s screenplay maintains its comedy and light tone in between the gunplay and incessant explosions. The plot has the five spirited members of a Special Ops unit seeking revenge after being betrayed in a mission that killed innocent children. Manipulated by a mysterious but lethal enemy known only as Max (Jason Patric), the five members, including leader Clay (Jeffrey Dean Morgan), Jensen (Chris Evans), Roque (Idris Elba), Pooch (Columbus Short) and Cougar (Óscar Jaenada), set about to stop Max from waging his own brand of high tech Global war—not an easy task considering the infrastructure this Bond-like villain has in place to protect his interests and himself. Joined by a no-nonsense, take-no-prisoners woman named Aisha (Zoe Saldana), who may—or may not—be on their side, this crew engages in every kind of gunplay imaginable in setting about their quest. Aisha also provides a romantic interest for Clay, which clouds his thinking and causes complications down the road.

Director Sylvain White infuses the proceedings with a lot of high tech gadgetry and flashy editing techniques that make The Losers feel more like a video game than a movie, but eventually we get to know the human element and the film takes off. The core group of five is well played, with Evans (graduated from Fantastic Four) generating lots of laughs, particularly in a well-choreographed sequence in which he invades an office building to get some classified info. Another comic book movie refugee, Morgan (Watchmen), is a strong presence and his scenes with Saldana crackle. After Avatar and Losers she deserves her own action franchise, as she proves as adept with an Uzi as any of these guys. Among the others, Short and Elba have strong moments, and Jaenada always seems to appear just in time to save the day. Appropriate for a comic book flick, Patric plays his evil corporate guy way over-the-top, maybe it’s too much but it’s fun to watch as he lets no one stand in the way of his wicked goals.

Although clearly made for a price, the film moves along and never slows down to breathe, just what the crowd that will line up for this thing expects. PG 13 rating is generous for this violent actioner and parents should be warned.