close
A family favorite in the making 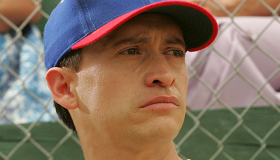 The true story of a group of ragtag kids from a Mexican village that, with the help of their priest and a down-and-out ex-major leaguer, form a baseball team that wins the 1957 Little League World Series is finally, FINALLY getting its theatrical release. Two years ago, Lionsgate stalled the title and then tossed it aside. With a new distribution strategy there is renewed hope for this inspiring, richly entertaining, heartfelt and totally winning movie that should strike a chord with everyone who ever had a dream. Decent box office should be followed by a rich future on DVD and beyond as soon as word of mouth catches up what is really a perfect family movie.

Against all odds, a poor group of kids from Monterrey, Mexico shocked the Little League world by managing to get a team together, finding a coach, crossing the border into Southern Texas and winning 13 games in a row. Eventually they’d be the first non-US team to win the championship of the League’s World Series in Pennsylvania in a game that was, and is to this day, the only “perfect game” in that Series’ history. Led by Cesar (Clifton Collins Jr.), who had a checkered history working for the St. Louis Cardinals, and bolstered by the will of a Priest (Cheech Marin), this unlikely group of young athletes go from a sandlot team to the big time, eventually even reaching the White House to meet President Eisenhower. Although they had to overcome many doubters, some strong parental objections, blatant discrimination and the bare bones existence in which they lived, the film emphasizes hope and determination on the part of these kids, particularly Angel (Jake T. Austin) who never says die even with a steel worker father (Carlos Gomez) who gives him no encouragement. After the initial set up, in which the team is formed and Cesar is convinced to become its coach, the bulk of the movie deals with the incredible journey they take on their way to Little League immortality.

Director William Dear, who seems to specialize in family films, hits this one out of the park with a heartwarming and true tale that is strongly enhanced by the consistent use of black and white newsreel footage of the real team interspersed throughout the movie.
Although The Perfect Game is firmly in the Rocky/Karate Kid underdog mode (right down to the use of those films’ composer Bill Conti for the soaring musical score), the uniqueness and ethnic flavor of the story makes it fresh in its own way.

Acting is first rate throughout with Collins Jr. superb as a talented guy getting his own second chance, Marin is perfectly cast as the warm-hearted Priest who offers moral and financial support, a feisty Emilie de Raven is an aggressive news reporter and the entire team is led by the irresistible Austin and Moises Arias (Hannah Montana) as the colorful Mario.