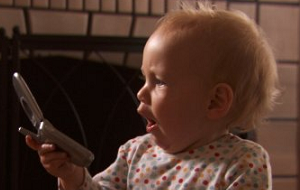 The rulebook for bearing babies-especially in the States-is longer than the Bible, and it grows every year. In fact, after the Bible, Dr. Spock's Baby and Child Care claims to be the second highest selling book of all time. (In truth, it's edged out by Chairman Mao and Dan Brown, but still trumps J.K. Rowling.) Even so, this documentary on one of the most universal, photographed, analyzed, opined upon and slavered over human experiences manages to astound. French filmmaker Thomas Balmes has hit a box office homerun with Focus Features' gambit, releasing Babies on Mother's Day. We've all had, been or been married to a mom, and buying a pair of tickets is a better gift than a box of chocolates.

Here's the scope of the project: Balmes scouted expectant families in San Francisco, Mongolia, Tokyo and Namibia. Once his new stars-three girls and a boy-popped out, he spent the next two years as the families' silent, camera-toting uncle. The footage he captured is astounding: Mari in Japan weeps with confusion when she can't understand geometry blocks, but resolutely tries to shove a circle into a square; Bayar in Mongolia braves a stampede of cows; Ponijao (now the second-most famous baby born in Namibia) first discovers that boys and girls have different parts.

Our perspective is adamantly 18-inches tall. Parents flit by like babbling bodies-even Hattie's English-speaking parents seem to buzz with white noise-and have themselves chopped into pieces by Balmes' baby-centered camera. Nameless, they appear in chunks: a breast, a knee, an arm.

In the best way, Babies is like being born again into confusion. Why is calligraphy written on Mari's feet? Why is Hattie's first view a hospital bed with tubes? Who are the eight other children buzzing around Ponijao? We don't know, and we won't know, and that's Balmes' big idea. He wordlessly reminds us of wonder. Those of us old enough to have to pay full price admission need a refresher course.

But as we watch these four very similar children navigate four wildly different homesteads, our mind tries to anchor itself by clutching to our own rulebook. Mothers-in-law have always claimed to know best, but lately it seems our culture has become one of simpering busybodies. Part of the pleasure of watching Babies is realizing that your kids aren't doomed if they don't eat 100 percent organic-they aren't even doomed if, like Ponijao, they down a fistful of dirt. But we aren't hard on Ponijao's mother. In fact, we're hardest on the San Franciscans and their insistence on doing everything right. In one scene, they tote Hattie (even the name is precious) to a tribal drum circle to worship mother earth. (When Hattie bolted desperately for the door, there were sniggers of schadenfreude in the theater-myself included.)

The trap is that we're as eager to judge as the kids are to explore. Balmes gives us scope and cultural perspective, and we have to fight not to digest it as practical vs. doting, chores vs. yoga, siblings vs. educational toys and, most sweepingly, indoor security vs. outdoor scenery. But this beautiful film with its postcard scenery deserves to be seen with young eyes. Everyone tells you how to raise a kid-this doc shows you how to feel like one. Leave adult neuroses in the lobby.