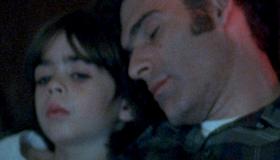 Few films can claim the festival pedigree of Daddy Longlegs (formerly known as Go Get Some Rosemary) with its acclaimed debut at the 2009 Cannes Film Festival Director's Fortnight and more recently at the 2010 Sundance Film Festival. Fewer films live up to such extensive advance hype, but Daddy Longlegs is a poignant, emotionally rich, sometimes playful, beautifully filmed tale of fractured fatherhood in New York City. Brothers Benny and Josh Safdie make their co-directing debut with Daddy Longlegs and the comparisons to other sibling directing teams like the Coen brothers and the Dardenne brothers are warranted. Though the pedigree is high with this indie fest favorite, box office still promises to be mild.

Lenny (Ronnie Bronstein) is divorced and only gets to see his two young boys (real-life brothers Sage and Frey Ranaldo) a couple of weeks a year. Much of their visitation time is spent at Lenny's Midtown studio apartment. While they share plenty of adventures, it becomes painfully clear that Lenny's incapable of being a good father to his sons.

Lenny's a divorced dad modeled on the Safdies' own father. He spends just two weeks a year with his young sons (Sage and Frey Ranaldo) and still fails to care for them. Some of Lenny's misadventures are playful. He takes his boys on an impromptu road trip to upstate New York with a woman he picked up at a bar. He lets them run wild at the cinema where he works as a projectionist. Steadily, assuredly, Lenny turns darker as he routinely abandons his sons and even gives them sedatives in order for them to sleep through the morning so he can go to work. Their father/sons adventure climaxes with a sudden escape from Manhattan with a fridge stuffed with toys strapped to Lenny's back. As they ride the Roosevelt Tram into an overcast sky, one cannot help but shed a tear for a loving father incapable of doing good.

Mumblecore comedies like Hannah Takes the Stairs have been the highlight of the independent New York film scene lately but Daddy Longlegs is more poignant, timeless and closer to classic cinema from François Truffaut to John Cassavetes.

Benny and Josh Safdie are co-founders of the New York-based collective Red Bucket Films. Past short films like Lonely John and There is Nothing You Can Do, shot on a New York City bus with actual riders interspersed with actors, and Josh's 2008 feature, The Pleasure of Being Robbed, are quality movies. However nothing compares to the artistry the brothers exhibit with their first collaborative effort.

Josh Safdie and Brett Jutkiewicz share the cinematography duties, and intimate camerawork as well as vérité style lighting allow the 16mm footage to sparkle. Lenny may be a working class New Yorker struggling to get by but the Safdie brothers portray his life beautifully.

Instead of a traditional script, Daddy Longlegs is based on a 44-page short story from the Safdie brothers who then collaborated with Bronstein to improvise scenes based on the story.
Eleonore Hendricks offers a great supporting role, and Sage and Frey Ranaldo, the sons of Sonic Youth guitarist Lee Ranaldo, are wonderful in the movie; displaying a sense of mischief equal to that of their father. Still, Daddy Longlegs revolves around Ronald Bronstein (writer and director of the indie feature Frownland) who delivers a performance for the ages. Lanky with bushy hair that's beginning to show flecks of grey, Bronstein becomes Lenny and the depth and truthfulness of his performance brings the film its emotional power. He attempts a handstand while crossing a busy street. He argues with his ex over his failings as a father. It all feels right.

Actually, Bronstein offers more than just an incredible lead performance since he helped improvise the scenes. With a collaborative process more far-reaching than most films, Daddy Longlegs may turn out to be a impressive calling card not only for the Safdie brothers but Bronstein as well.

Daddy Longlegs is on VOD via the Sundance Selects program and will have a limited theatrical release after its May 14 opening at the IFC Center in New York. Critical word of mouth will be sky high for the co-production from Neistat Scott & Associates, Red Bucket Films and Sophie Dulac Productions but overall box office will remain modest due to its limited release and the increasing competition for arthouse screens. Daddy Longlegs is a discovery destined for year-end top ten critics lists and comparisons to classics like Vittorio De Sica's Bicycle Thieves are expected. Hopefully, Daddy Longlegs will also introduce the Safdie brothers to the larger audiences they deserve.