close
Get thee to the multiplex for laughs

Get Him to the Greek 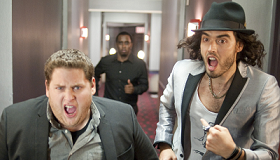 The Forgetting Sarah Marshall crew-and yes, that includes producer Judd Apatow-have a follow-up gig that's not to be missed. Potentially the summer of 2010's version of The Hangover, Get Him to the Greek is a hilarious buddy comedy that reunites Jonah Hill and Russell Brand, with Sean ‘P. Diddy' Combs acting as pimp. Once moviegoers get past the somewhat awkward title and recall the fun they had watching Forgetting Sarah Marshall, ka-ching! ka-ching! will be heard inside Universal's vaults, especially considering the studio's outlay had to have been relatively modest.

The Hangover similarities stem from the movie's raucous Vegas interlude as well as the likelihood it will arrive relatively low under the radar and earn lots of coin. More significantly, Get Him to the Greek also follows a tried-and-true template: throw opposites together on the road and have them sort out each other's lives. The road in this case means first class airline cabins, chauffeured SUVs and decadent nightspots stretching from London to L.A.

Jason Segel, Forgetting Sarah Marshall's writer and star, is credited with creating the characters, although in both cases they're inseparable from the performers. Arguably the best thing about that 2008 romcom was Brand's rock musician, Aldous Snow. (It's hard to see how anyone but the British actor/writer/comic could take credit for the persona, which may be why Segel doesn't appear, or seem to have had a big hand in this-hence the token "co-producer" title.) Aldous is back, front and center. We clap eyes on the Dionysian basket case in a pre-title montage as he performs in the video for his song "African Child." This disastrous foray into celebrity noblesse oblige invites media scorn and marks the beginning of a downward spiral, personally and professionally. Thus ends seven years of sobriety, plus his relationship with soul mate, Jackie Q (Rose Byrne), a stringy pop singer and the mother of his son.

Meanwhile, Jonah Hill's wry slacker, Aaron Green, toils in the Tinseltown record company run by Sergio Roma (Combs in a dead-on, foul-mouthed performance not unlike Tom Cruise in Tropic Thunder). With his business tanking, Sergio berates his toadies to come up with some ideas and Aaron suggests getting Aldous to appear at the Greek Theater on the ten-year anniversary of his landmark live performance in the amphitheater venue. Soon, the 24 year old music lover is on his way to London to fetch the down-and-out rocker for a possible comeback.

What transpires gives fresh meaning to ‘sex, drugs and rock 'n' roll.' First stop after sampling a few Limey clubs: New York and an outdoor performance on the Today show-this allows Universal to cross promote and Meredith Vieira to act startled by on-air hijinks. Next, a detour through Vegas, where Aldous visits his father (Colm Meaney) and Aaron learns what a "Geoffrey" is, namely, a powerful drug cocktail in spliff form. The duo's eventual arrival in L.A. allows Aldous to help Aaron fix his relationship with his doctor girlfriend (Elizabeth Moss) and Aaron does some psycho-spiritual healing of his own.

Among the questions arising in transit: What's the best way to score heroin in Sin City? Will Aldous and Aaron kiss? Will Aldous stick his fingers up Aaron's back passage? Will a girl named Destiny stick something bigger up there? Why does Sergio's disembodied head appear during a trippy, post-absinthe-quaffing sequence? Finally, can stroking a fur-lined wall have a calming effect on strung-out people?

Writer/director Nicholas Stoller never misses an opportunity to take the piss out of the music business and celebrity-hood more generally. Spoofing contemporary recording artists and execs isn't difficult, but there's something trenchant about the parody here thanks to Combs' robust participation, the over-the-top mock songs penned for the soundtrack (look for Jackie Q's ode to her anus and Aldous's celebration of his bangers, beans and mash) and the two lead performances. The humor is not just verbal or broadly satirical. Both Brand and Hill communicate as much with their facial expressions and bodies as they do with words. While still riffing on his stand-up persona and its Sarah Marshall incarnation, Brand shows flashes of genuine dramatic depth. Hill seems to be the more typecast actor, though he plays the straight man more than the obnoxious nudge. Judging by this turn, he's got unexplored range.

Get Him to the Greek has all the hallmarks of an Apatow project. It's raunchy, kinda sweet and filled with snarky pop culture references. Not surprisingly the third act has some structural issues, but while it's a tad long it isn't bloated or overly ambitious à la Funny People. It strikes an entertaining balance between the predictable and freewheeling, between being conventional and outrageous. Personally, I could do without all the vomit, but, then again, physical discomfort is essential to comedy. And at least now I know that furry walls can calm my anxiety.