close
A romantic comedy that wisely demands more than mortification 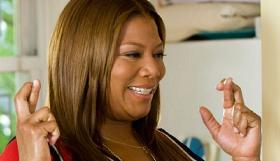 Sanaa Hamri's big-hearted RomCom is a Cinderella story where the princess wears Reebox. Queen Latifah stars as a tomboy physical therapist so certain she'll never snag a prince-here, an NBA star played by Common (i.e. modern royalty)-that she never thinks to shove her ladies into a push-up bra. With just enough honest heartache to get us slavering for that kiss, Just Wright is two hours of femmepowering wish fulfillment-even though it won't be a box office MVP, it'll exit the multiplex having played a good game.

Latifah has more from-the-block charm and cred than a dozen J-Los and she's served well by Michael Elliot's script, which frames her as a confident caretaker who's sick of hearing her first dates say she's the perfect woman...for somebody else. Her character plays to her strengths and her audience: she's a knock-your-socks-off girl next door, successful enough to buy her own fixer-upper in Jersey. Her foil is cousin Morgan (Paula Patton), a beauty who wants to snag a baller and become a brand. (Think Kimora.) But to the script's credit, though Morgan is shallow, she's not a snake. And when she snags Nets star Scott McKnight (Common), a sweetheart power forward who loves Joni Mitchell, we and the Queen take it in stride as the proper order of the universe.

Of course, we're here to see Latifah earn her man, and while we're never in doubt she'll slam dunk his heart, Just Wright stays true enough to human nature that we're actively cheering her on. This isn't a wishful view of manhood that pretends Common won't be swayed by Patton's supermodel face, but neither is it so grim about a humble woman's prospects that it makes Latifah win him through self-flagellating devotion. The girl's got pride and heart-both rare commodities in a genre that likes its women to trip over their own stilettos.

That Latifah gets to keep the guy and her dignity makes this modest charmer a winner. Where other RomComs fetishize handbags, the biggest swoons in my theater came when Common made Latifah a cup of chicken noodle soup. We don't wholly buy their chemistry-nor do we buy Common as an NBA champ when he's a full foot shorter than everyone on the court-but they're kind to each other from day one. Just Wright makes us wonder what's gone wrong in our Hollywood romances where boy meets girl, boy snipes at girl for 70 minutes and then boy magically realizes he loves girl in time for a closing credits kiss. These romances aren't built on respect; they're founded on mortification-the systematic stripping away of ego until both parties are such losers, they're perfect for each other. I'm tired of this humiliating path to love where he's got to be humped by a dog and she's got to be thrown into a mud puddle. Katherine Hepburn demanded better. So does Latifah-and so should we.