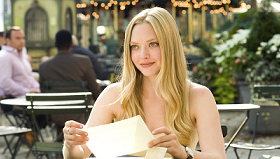 It's a bad sign when a love triangle comedy leaves you siding with the jilted. But as the ex-fiance-to-be (I'm not spoiling anything you couldn't glean from the trailer) Gael Garcia Bernal sparks more passion than if lead snoggers Amanda Seyfried and Christopher Egan made out under a Tesla coil. A yarn about an engaged American tourist's spontaneous Italian road trip with two strangers, Letters to Juliet's swoony setting and regal turn by Vanessa Redgrave make a trifle feel like an indulgence. Like Seyfried's recent romance Dear John, Juliet should score sweetly with teens and dreamers, and boast a theatrical life span just long enough for a postcard.

Seyfried plays Sophie, your standard girl-who-has-it-all-but-really-doesn't. She's got the dream job at the New Yorker, albeit as an entry-level fact checker, and her fiancé, Victor (Bernal), is a restaurateur who's just mad about the perfect Parmesan. He's nuts for her, too-and so are we, Seyfried glows-but on their pre-honeymoon vacation to Italy, he's too distracted with visiting dairy farms and charming vintners to take her on a greatest hits tour of Verona. Alas for Seyfried and the audience, neither of us gets enough time with Bernal's crazy smile and cultured hyperactivity. No matter. Seyfried's got a guidebook and a yen to see the wall where lovelorn women leave notes for Juliet of Shakespeare's fame (you know, because her romance with Romeo worked out so well).

There's a mellow warmth to the early stretch of Gary Winick's (Bride Wars, 13 Going on 30) Euro love story as Seyfried unearths an old letter from behind a brick in the wall and totes it like an offering to the Secretaries of Juliet, an unpaid staff of scribes who respond to every note. Rather than pout that this turista has turned up a missive they've overlooked for five decades, they hire her on the spot. Cozied in the Secretaries' den of pasta and breast-clutching, we're won over by this celebration of amore. But this is an American film, and to Americans love isn't a magical mystery-it's a hard-won goal.

With the entrance of Redgrave as the letter writer still carrying a torch for her long-lost Lorenzo, the love she once ditched, Jose Rivera and Tim Sullivan's script goes from dreamy to over-determined. Bounding alongside Redgrave like a guard dog is grandson Egan, one of those frosty, stiff-lipped Brits who believes in true love about as much as the Tooth Fairy. And so, deemeth Hollywood, the sweetheart shall layeth down with the cad.

But first, the belabored couple must cruise around the picturesque Italian countryside with Redgrave as she hunts down every Lorenzo in the phone book. When they knock on door after door of septuagenarians, they're struck by a spasm of nerves: Will it be him? Will he be forgiving? Will he be hitched? Will he be dead? We, on the other hand, are less tense.

Juliet doesn't have a lick of cynicism-it's as pure of heart as they come-and there's no risk of an unhappy ending. Even so, it's all just so easy. (If the movie was truly European there'd at least be tears.) The cause, I suppose, is that this movie believes that true love isn't supposed to be hard. A fine ideal, but it feels as flat as a pizza.