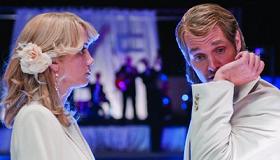 MacGruber-starring an SNL actor, written by an SNL writer and directed by an SNL director-has all the outward tics of an SNL movie: the one-sentence set-up, the bad wigs, the catch phrases. And Saturday Night Live films have a bad rap; most feel over-extended, like a single pixel snapshot blown up for the big screen. But MacGruber, like Wayne's World, is hi-def hilarious-when a panther growls as Will Forte's cocky secret agent lands a back flip, you can't imagine how this ridiculous universe could ever be compressed for TV. Still, audiences have been so burned by It's Pat! and Superstar they won't be lining up for opening weekend, but expect word of mouth to keep it in the top ten for a respectable chunk of the summer season.

MacGruber (Forte) plays a former agent who's been hiding out in Ecuador since the wealthy villain Dieter Von Cunth (Val Kilmer, great) blew up his wife (Maya Rudolph) on their wedding day. But now, in a surprisingly bloody intro that seems shot just to guarantee an R-rating, Von Cunth has shot up a squad of Russians and stolen a nuclear missile. MacGruber's former Colonel (Powers Boothe, a grumbling powerhouse) and a prim rookie (Ryan Phillipe, not funny and not trying to be) enlist him to save the world and score some revenge. And so, joined by token chick Kristen Wiig (playing against cliché as an nervous coward instead of a brassy hottie), the team sets out to pound some Cunth-a joke that by sheer force of will never gets old.

Leslie Nielsen spoofed spy movies by giving us more, more, more: bigger spit takes, D-cup women and an Afro so big O.J. Simpson couldn't walk through a door (much less dodge the cops). But this isn't 1988-today's audiences don't want to see their comics sweating for a laugh. Lampoons are dead and sarcasm lost its sour glee just after Wayne and Garth. Today we dig anti-comedy, thinking that we discovered the joke, and director Jorma Taccone understands that odd tone of straight-faced, almost surrealist bluster. He's always setting us up for an ordinary punchline and then changing course. When MacGruber hacks off his Michael Bolton curls and reveals a straight-haired, metal-head mullet, Taccone knows we don't want a follicular explanation. When in one day, MacGruber travels from South America to Washington DC to Colorado to Vegas, we know it's impossible and we don't want the gag spelled out. Every expectation is subverted, every glorious moment undercut. Sexy love scenes devolve into uncomfortable thrusting and grunting. Even in the editing room, Taccone cuts off explosions in mid-blast and he gets more laughs from a close-up of Wiig and Forte touching hands than Eddie Murphy ever could huffing his way into an XXL fat suit.

Of course, part of the joke is that this is 1988 to MacGruber who loves tooling around town listening to "Careless Whispers" in his sweet red convertible. We're meant to think the tragedy has frozen him in the past (though if he dropped out of pop culture in 1999, he should be dressing like Bono). But what makes Forte so funny is that he stalks through the flick cocksure and utterly deadpan. And even when he sticks celery up his ass cheeks as a diversionary tactic, no one in the movie laughs as if nervously elbowing us to join in. The grace note is we're also not made to think his tossed salad is normal-it's awkward nonsense, yet, like the film around it, it works.