close
A sardonic and meaty role for Timothy Hutton 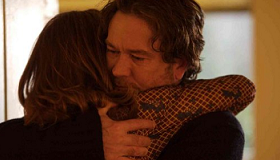 Shot over three years ago but only finding limited release now, this soul searching dramedy about a man questioning his past choices and future directions is notable mainly for the fine, nuanced portrayal of mid-life crisis provided by Timothy Hutton. That won't be enough to get butts in seats, however, for this well intentioned but slight feature debut from Brooks Branch. Expect mild returns in its LA/NY launch with a quick retreat to DVD and cable runs being the best hope for landing any sizeable audience.

Hutton plays a highly successful and seemingly happy architect who finds his life oddly disappointing and unfulfilled, despite having a nice apartment, a devoted wife (Dana Delany) and a sweet daughter (India Ennenga). Instead of going to work he heads to the local movie theater alone where he likes to attend the Burt Reynolds comedy Starting Over in repeat viewings. In dire need of a shake-up he quits his job, sets up a typewriter in the bathroom and begins to write a play about himself and the people in his world. Everywhere he goes he tapes his thoughts on a voice recorder and even finds an agent (Stockard Channing) who prods him to finish so she can take his yet-unwritten play to Broadway. Meanwhile, as he endures this mid-life crisis, his real world starts crumbling around him. His introspection taking a toll-he examines his life as it was, as it is and as it may be in light of his new found hobby-cum-obsession.

Much of Branch's musings (co-written with Linda Morris) border on pretentious but there is something mildly intriguing about the filmmaker capturing a certain time in the late '70s when movies about the human condition, including Hutton's own breakthrough Oscar winning role in Ordinary People were far more prevalent than they are today. In fact, this role is a perfect bookend for Hutton. It's every bit as introspective as Conrad, the suicidal teen he played in that 1980 classic, although Gabriel is a more optimistic character to be sure. Hutton has always been a fine actor but in the last couple of decades hasn't nearly been given enough quality material to match his talents. The cast surrounding him is first rate with another Oscar winner, Mira Sorvino, performing very well as his lifelong best friend and confidante. Mario Van Peebles as a gay co-worker (complete with '70s afro) is understated and amusing. Delany plays her understandable confusion at her husband's odd lifestyle switch with perfect timing and mounting anger, while Ennenga is enchanting as their daughter. Channing doesn't bring any new tricks to the table but with her character's tenacious and spirited nature she's fun to have around for a few brief scenes.