close
Something the legends of Hollywood would have loved

Prince of Persia: The Sands of Time 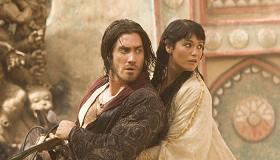 Prince of Persia is a rip-roaring great time at the movies, a summertime treat that "reverses time" to when flicks were just plain fun. Mixing old-fashioned content and state of the art effects, this Jerry Bruckheimer production trades ‘pirates' for ‘princes' to revive the swashbuckling, sword fighting spirit of the sort Douglas Fairbanks or Errol Flynn specialized. An impressively coiffed Jake Gyllenhaal stands tall as the dashing Prince who joins forces with an exotic princess to safeguard a precious dagger that can reverse time. While the younger audience will be more familiar with the storyline's originating video games (rather than the early Hollywood adventure classics it resembles), this handsome Prince should be another Bruckheimer hit, if not on the blockbuster level of his sequelicious Pirates booty-although it's obvious the mega-producer is hoping to steer this into a new franchise.

Inspired by Jordan Mecner's video games, the story is set in ancient Persia and revolves around a scrappy street kid named Dastan (Will Foster) who's adopted by the King Sharaman (Ronald Pickup). Dastan quickly grows up, the adult version played by Gyllenhaal. Raised alongside the King's real sons, belligerent Tus (Richard Coyle) and the more sensible Garsiv (Toby Bebbell), and shown the tricks of the trade by his dad and uncle Nizam (Ben Kingsley), Dastan grows determined to show off his newly formed skills. He does this by leading the attack on Alamut, the city thought to be hiding major weapons (a not-so-subtle modern day Iraq parallel) but instead holding a much bigger secret, the mystical Sands Of Time (hence the title) which reverse, well, time. We're off to the races when Dastan manages to grab the ancient glass dagger that holds the key to the Sands, but soon the King is killed and Dastan is wrongly accused of the deed. On the run he hooks up with the lovely Princess Tamina (Gemma Arterton) who, because of a proud family history, has a vested interest in protecting the dagger. Together they fight off numerous enemies, finally leading to an inevitable confrontation with the person really responsible for the King's murder.

Under Mike Newell's (Harry Potter And The Goblet Of Fire) assured direction, all this derring-do chasing around and swordplay turns a lot of silly-on-the-surface histrionics into an exciting, action-packed adventure in the great tradition of epic entertainments. It's helped with superb production values, particularly John Seale's sweeping cinematography and three time Oscar winner Michael Kahn's breathless editing, which manages to make the 116 minute running time seem even shorter than it is. Sharp casting doesn't hurt either and Prince benefits from a terrific and funny turn by Alfred Molina as a slippery Sheik who runs ostrich races and a master African knife thrower, Seso, amusingly played by Steve Toussaint. Among the others Kingsley is craftily cunning and Arterton is not only gorgeous, she's smart.