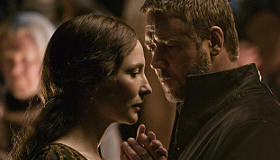 After at least 30 previous screen incarnations of the legendary Robin Hood since 1913 some might wonder if there was a need for yet another, but director Ridley Scott's Robin Hood is one for the ages, taking the tale back to its origins and giving definition to the legendary crusader. In the tradition of Gladiator and Braveheart (both Best Picture winners), this is spectacular epic moviemaking at its best. Actors from Errol Flynn to Kevin Costner have played Robin and this classic tale has been retold many times over, but never on this kind of massive scale before, or with this kind of intelligence. If audiences can get over the idea that it's just another rehash, Universal could have a sizable summer hit that caters to moviegoers looking for something more substantial than comic book characters and chick flick sequels.

Reteaming with his Gladiator star Russell Crowe as Robin, Scott and screenwriter Brian Helgeland set their story in the first part of the 13th century, as Robin returns from service in King Richard The Lionheart's (Danny Huston) army. Upon Richard's untimely death, Robin, who has been impersonating a fallen knight named Sir Robert Loxley, eventually makes it to the corrupt town of Nottingham where he encounters the man's real widow, Lady Marion (Cate Blanchett). Though Marion has been promoted from Maid to Lady in other versions before, here she stands to lose her claim to her land unless she has a husband. In an opposites-attract sort of yin and yang, Robin hopes to impress Marion and, banding together with his "Merry Men," simultaneously save his country from the ineptness of the nation's new king, John (Oscar Issac) and his evil advisor, Godfrey (Mark Strong).

The era of the Crusades proves a vivid and useful backdrop to show Robin's emergence as a leader of the oppressed. Essentially, in detailing each of the story's characters we get a real sense of what made the man and what influences he was under. In that way Scott's Robin Hood is really a prequel or primer to all the cinematic Robin Hoods that have preceded it.

Those expecting a simple tale of marauders in green tights taking from the rich and giving to the poor are in for a much more complex and satisfying epic, the kind of thing you would figure Scott, director of historical riffs like Gladiator and Kingdom Of Heaven, might deliver. Worth the price of admission is Scott's masterful staging of the invasion of King Phillip of France's (Jonathan Zaccai) massive armada into England. This climactic battle sequence is thrilling in its scope and execution, showing off cinematographer John Mathieson's breathtaking camerawork to full effect. More of this kind of action might have been welcome as Helgeland's script sometimes gets too bogged down in talk, particularly in the first half.

The entire cast is superb. Crowe's an ideal Robin Hood-born to play the role-he's fully in command but human to the core. He owns it. Blanchett is magnificent, a tough, no-nonsense Marion who is every bit the match for Robin. Scott Grimes as Will Scarlet, Kevin Durand as Little John and Allen Doyle's Allan A'Dayle make up a strong trio of Merry Men. Also outstanding are Robin's elder protectors, William Hurt as the loyal but shrewd Sir William Marshal and Max Von Sydow as the wise Sir Walter Loxley, Marion's father-in-law. Issac is a bumbling whirlwind of self-doubt and massive ego as the new King John, with a regal Dame Eileen Atkins imposing as his mother Eleanor Of Aquitaine. Mark Addy has some amusing moments as the likeable Friar Tuck, while pure villainy is well-handled in this edition by Strong's slippery Godfrey and Matthew Macfayden's wicked but underused Sheriff of Nottingham, both terrific adversaries for our fair Robin.

Top production values throughout distinguish this handsome and fresh retelling of an immortal classic. If you think you've seen Robin Hood before this version, think again.