close
DreamWorks says this is the final chapter for Shrek and his gang. Say it ain’t so! 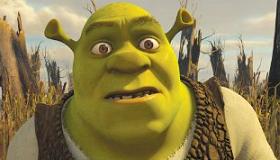 If Shrek Forever After truly is the final installment of the Shrek franchise, (and who believes movie studios when there's still a buck to be made?) it's a great way to go out. Hilarious and heartfelt from start to finish, this is the best Shrek of them all, and that's no fairy tale. Borrowing liberally from Frank Capra's It's A Wonderful Life, this edition blends big laughs and emotion to explore what Far Far Away might have been like if Shrek never existed. We might wonder the very same thing about Dreamworks Animation without this multi-billion dollar franchise that has spawned four movies, TV specials, a Broadway musical and more merchandise than you can shake a Donkey's ass at. Expect a bountiful, record-breaking haul at the turnstiles again. The simple truth is you can't beat these beloved Ogres in brilliant 3D (for the first time) for pure entertainment this summer.

With a family consisting of three screaming Ogres, his loving wife Fiona (Cameron Diaz) and a seemingly contented lifestyle, Shrek (Mike Myers) finds himself in a mid-life crisis pining for the days when he wasn't awash in such "domestic bliss." After a nervous breakdown at a birthday party he finds himself making a pact with the devil, or in this case the oily and vengeful Rumpelstiltskin (Walt Dohrn), who blames Shrek and his ilk for his miserable life. So, in a diabolical plan to make himself ruler of the land he offers Shrek a day to re-live, which the naïve Ogre accepts. Stilskin chooses the day Shrek was born thrusting him back into a hometown that has no idea he ever existed. There he meets up with old friends who claim they never knew him including Donkey (Eddie Murphy), now basically a chauffeur for the witches who serve Stiltskin's every need; and Puss ‘N Boots (Antonio Banderas), the once proud cat who has clearly let himself go. Shrek soon discovers that at the end of the day he will cease to exist entirely unless he can score a magical kiss with Princess Fiona, who is now a freedom fighter for the Ogres and leading the resistance to Stiltskin. Unfortunately she wants nothing to do with him and complications ensue as Shrek races against time to save his kind and himself.

The basic Capraesque plotline has been done to death but it seems surprisingly fresh here, in the capable hands of director Mike Mitchell and writers Josh Klausner and Darren Lemke. The filmmakers milk the premise for all its worth and keep the laughs coming at such a pace it can be said Shrek is without question the funniest film of the year-at least so far. The beauty of this franchise is the wide swath of characters it is able to incorporate and the fractured twists it cleverly pulls on the old fairy tale formulas. Myers and Diaz continue to bring warmth and humanity to their vocal work as Shrek and Fiona, while Murphy and Banderas (reportedly getting his own Puss in Boots spinoff next year) are roll-in-the-aisles funny in all their scenes. Dreamworks head of story, Dohrn, is the rare non-star to get a major speaking role in the franchise, but he brings such a frantic, convincing mania to Rumpelstiltskin that it's hard to imagine anyone topping this performance. Actors, even in minor roles like the 3 Little Pigs and Gingerbread Man, are also superb, bringing a unique vocal personality to every last resident of Far Far Away and getting hearty laughs out of simple lines like "we ate the cake." The use of 3D is effective and enhances the sharp visual look of the whole enterprise.

If Shrek Forever After is to really be the ending for this terrific franchise, it's definitely a happy one.