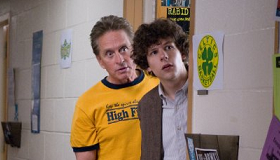 Anyone familiar with the modus operandi of Nu Image/Millennium Films and its leading triumvirate, Avi Lerner, Moshe Diamant and Danny Dimbort, will see the company's fingerprints all over Solitary Man. Notwithstanding Steven Soderbergh's name among the nine credited producers, this is strictly mid-level assembly line product, designed to ride entirely on the modest marquee value of second-tier or past-prime stars. As with most Anchor Bay releases, theatrical exposure will be mostly spotty and symbolic with the company's core home entertainment business doing the real heavy lifting once the title moves to DVD.

Michael Douglas stars as Ben Kalmen, a former New York auto dealership mogul looking to rebuild his empire and reputation in the wake of scandal and a busted marriage. What's really plaguing Kalmen, of course, is a chronic case of mid-life crisis. A mortality scare some years earlier transformed this once gracefully aging fiftysomething man into a pathetic, overgrown frat boy. While his ex-wife (Susan Sarandon) and daughter (Jenna Fischer) plainly see him for what he is, Kalmen's natural charms still seem to work on just about everyone else, including his well-heeled current girlfriend (Mary-Louise Parker) and her daughter (Imogen Poots). Ben's Achilles heel, however, is that he's not just a greedy, egotistical jerk but also a libidinous, lecherous, greedy, egotistical jerk in total denial about his age. If it were just about money, he might have coasted by without a hiccup. But once his penis comes to the party, the house of cards comes tumbling down.

There's no question that Douglas is right for the part-no actor in history has so ably mastered the art of playing charismatic sleaze balls, and while Kalmen is hardly one of the more memorable, Douglas plays him so skillfully and effortlessly that it almost makes the script's weaker spots-of which there are plenty-tolerable. But the picture ultimately fails to distinguish itself as something genuinely original-Kalmen's trajectory feels a little bit like watered-down Charles Foster Kane or heavily diluted Tony Montana. It's a precipitous decline, but so contrived and so fearful of the natural extremes that would both make sense and appropriately shock viewers, that it ends up verging on the trite. When Kalmen starts waxing poetic about life's meaning with an old buddy (Danny DeVito) it's hard to contain the snickers.

What's really disappointing about Solitary Man is that an old-fashioned studio-style development process might have salvaged and improved on the original concept-not necessarily enough to make it good, but certainly enough to make it acceptably commercial. Unfortunately, the logjam of producers-all too common with independent films of this type-suggests a process more oriented toward financing and sales than actually delivering the goods. Until that changes, movies like Solitary Man will continue to be more rule than exception.