close
Today, greed is unironically bad, but this movie is great 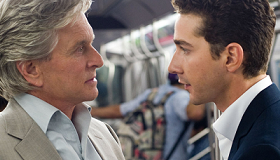 With the woes of Wall Street constantly in the headlines, Oliver Stone could not have picked a better time to reignite Wall Street. The 1987 original starred Charlie Sheen (who has an amusing cameo in this version) as the hotshot protégé of Michael Douglas in his Oscar winning turn as the slippery and shrewd stock wizard, Gordon Gekko. In this revamp, Gekko turns up harried and grayer but still hunting for a way back into the "game" after serving eight years in prison for his bad trading habits. He's now gotten involved with another young hotshot (Shia LaBeouf), who happens to be engaged to Gekko's estranged daughter. Combining a strong family story with Stone's precise and knowledgeable insights about the way the finance industry works-or doesn't work, as the case may be-this 2010 update is worth its weight in gold futures and should help 20th Century Fox's stock rise when it's released on September 23rd, a full 4 months after this week's splashy debut as an out of competition entry at the Cannes Film Festival. Box office should be brisk and prospects assured on DVD, where this crafty follow-up will be essential back-to-back viewing with the original to see how far we haven't really come.

Much like Martin Scorsese's The Color of Money (1986), which updated Paul Newman's Fast Eddie Felson character from the 1961 film The Hustler, Stone and his screenwriters Allan Loeb and Stephen Schiff are skillfully using the long period between original and sequel to allow the "reformed" veteran to show the ropes to the eager young player before letting that old itch to be back in the "game" take over.

This version opens with Gekko freed from prison, alone and broke with basically just an Edsel-old cell phone that's (comically) returned to him on his release. He's estranged from his daughter, Winnie (Carey Mulligan), who wants nothing to do with him, and in fact blames her father for the drug overdose death of her brother (it's an eerily uncomfortable connection to Douglas' own real life situation with son Cameron). Despite her disdain for Wall Street, she is engaged to idealistic investment banker Jake Moore (Shia LaBeouf) who is being mentored by an old lion investment firm head, Louis Zabel (Frank Langella). When tragedy strikes and Zabel's firm collapses, arrogant Wall Street manipulator, Bretton James (Josh Brolin) buys the firm for virtually nothing and recruits the promising Jake, who wrongly sees this as a chance to show his stuff. Jake tries to assist some reconciliation between Winnie and her dad but actually ends up covertly teaming up with Gekko, who has written a best selling expose of Wall Street and spends most of his time giving lectures or attending his book signings. Through Jake, Gordon sees a way in against his nemesis James ("You stop telling lies about me and I'll stop telling the truth about you," Gekko memorably utters to the hard-nosed trader). Jake makes some bad decisions that power the second half of the film, during which Douglas' character becomes a lethal player once more, forsaking whatever familial ties that bind.

Brilliantly cast, Wall Street 2 is a crackerjack powerhouse of a movie that shines a light on the financial machinations described by Warren Buffet as "an economic Pearl Harbor." Douglas is once again superb, getting most of his action in the last hour but not losing any of the luster of his Oscar-winning role. LaBeouf is solid and engaging and Mulligan is wonderful as the moral center of the movie. Brolin is great but not overbearing as the main villain of the piece and Susan Sarandon has some nice, if brief, scenes as Jake's money-grubbing mom. Langella proves integral in the first part of the film while another veteran, 93 year old Eli Wallach playing a feisty company patriarch, steals every scene he's in.

Stone's surprisingly vital revisit to his hit 1987 movie only really falters right at the end, when it appears to succumb more to old Hollywood conventions than to Wall Street's. But like the key characters in the film it still leaves us wanting more.