close
Allen fans won’t be disappointed with this latest confection

You Will Meet a Tall Dark Stranger 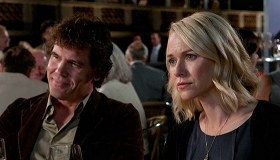 Woody Allen is back in England for the fourth time, and still concerned with the lives and eternal longings of characters in search of that elusive thing called love. A choice cast and, as usual, some snappy Allen patter and observations on amour-or the lack of it-will hit the bulls-eye with Allen fans who follow him wherever he goes, particularly European audiences. In the U.S., expect about the same kind of middling box office numbers he usually gets. This is no overachieving Vicky Christina Barcelona or Match Point in that regard.

Allen sets this table with a group of people of various ages and desires who just can't seem to get emotional satisfaction with their current partners. Problem is, the new love arenas they dabble in will only bring a new kind of heartbreak. The audience is certainly in on Allen's wicked joke, even if the characters aren't themselves.

Among the players is Alfie (Anthony Hopkins), a man 40 years married to Helena (Gemma Jones) but in the midst of a well-past midlife crisis that causes him to hit the gym, move out and take up with a hooker/wanna-be bimbo actress Charmaine (Lucy Punch). Meanwhile, Helena's daughter, Sally (Naomi Watts) sets her up with a fortune teller/psychic named Crystal (Pauline Collins) in hopes it will curb Helena's deep depression and help her realize there's hope for the future (even if Crystal is a little phony). The psychic tells her she will meet a "tall dark stranger" but instead she encounters a widower and spiritualist bookseller (Roger Ashton-Griffiths) who's still obsessed with his late spouse ("the deceased wives are always our biggest competition," says Helena). Meanwhile Sally's totally frustrated with her deadbeat, failed-author-of-a-hubby, Roy (Josh Brolin), whom she supports even though he refuses to father a baby with her. She starts having feelings toward her art gallery boss, Greg (Antonio Banderas), who is also unhappily married but he's hard to read. Back at home, Roy gazes out the window to the apartment across the way where he ogles gorgeous Dia (Freida Pinto) in various states of undress and decides to find a way to meet her-which he does.

The complicated connections between this fairly pathetic group are deftly handled by Allen who weaves in and out of their feeble gameplans for love. Although he's not breaking any new ground here, Allen is such a skilled writer/director that he knows just how to piece this wryly amusing emotional puzzle together in delightful ways. It's only at the end that he fumbles when the film just sort of stops without much resolution for any of the group except Helena, oddly the one initially thought least likely to find happiness again. Jones is superb and poignant as an aging woman hanging on to every ridiculous, happy prediction she gets from Crystal. Hopkins struggles with Allen's precise rhythms in parts but is all-pro. Brolin's quite funny and Watts, in the film's toughest role, manages to bring all of Sally's bitchy bitterness to an understandable human level. She's the most three dimensional of the bunch, but also the least funny. Banderas, Pinto and Ashton-Griffiths are in and out but do it with droll style.

Bottom line: It's a good one, fresh, funny and vintage Woody.