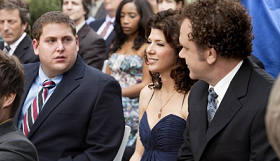 It's nice to know that as mumblecore masters Jay and Mark Duplass graduate from twine and bubblegum productions to Oscar winning casts and big money executive producers they haven't ditched their loose, character-first style. But that doesn't mean Cyrus, their first studio effort and most mainstream movie to date, didn't lose something in the economic translation. Mumblecore films (The Puffy Chair, Baghead) are slow and talky, but their emotional indulgence and handheld visual aesthetic are a unique taste worth acquiring. In Cyrus, the brothers introduce the kind of pickle that requires lengthy couch confessionals (usually with the woman, knees to chest, covered in her favorite quilt). But in throttling back the character self-analysis to get more people under their tent, Jay and Mark have created something only partially satisfying that fails to achieve complete success as either straight comedy or modern love story. Those unfamiliar with the Duplass' previous movies won't realize what's missing; they'll just enjoy the earthy angst, edgy laughs and off-kilter casting of Jonah Hill. Even with its small budget, ancillary will eventually eclipse theatrical.

The Duplass brothers emerged from a micro-genre marked by generous interpersonal discussions that mix light comedy and hard truth. But in Cyrus, instead of tackling their story, the brothers just sort of push it around and then suddenly declare a happy ending. Still, their improv experiments are always deft. Here, we're constantly readjusting our theories about Molly (the ageless Marisa Tomei) and her 21 year old son Cyrus (Jonah Hill). With dad out of the picture, Molly and Cyrus are very close, so close we constantly wonder if they're incestuous. Keeping us on edge regarding the nature of their co-dependant relationship is the film's hypnotic trick. Cyrus always calls his mother by her first name, claims she's a "sexy angel" and when they take their daily trip to the park, they playfully wrestle in a way that makes you wonder. As such, the home schooled, innocent-seeming Cyrus is the film's crucial piece of casting. Hill's roly-poly presence begs us to laugh, but he's yet to develop into a detailed or interior actor. With his blank, round face rarely showing its cards, the character remains intriguing and funny but less than real.

Soon, Cyrus reveals himself as a crafty sort with an evil streak that emerges when someone comes between him and Molly. That someone is John (John C. Reilly), a lonely divorcee who's fallen further into despair after learning his ex-wife Jamie (Catherine Keener) is about to remarry. Jamie drags a depressed John to a party where he first encounters Molly, hot, willing and seemingly perfect. As John and Molly's courtship intensifies Cyrus feels increasingly threatened, until he resorts to lying and manipulating to force the interloper out of his mom's life. So this is basically the story of two men fighting over the same woman. John is fortysomething and afraid of being alone; Cyrus is afraid of losing his mother, to whom he is unhealthily attached. The film's latter half is a declared war between the two for Molly's favor. Hill (Superbad), heretofore relegated to snark duty in slacker comedies, is on firmer ground here, as Cyrus feigns night terrors and addresses John in horror movie whispers. Reilly, as he proved definitively in Chicago, is always on firm ground, no matter what the situation. With his sunken, vulnerable eyes and squishy face, he has our sympathy as he avoids the potholes of a bizarre family situation that requires him to console Cyrus, then turn around and promise hell if he ruins his ex-wife's wedding. But the curious, squirmy dynamic between Molly and Cyrus and the verbal battling between Cyrus and John don't lead to the depths of introspection we've come to expect, and enjoy, from the Duplass brothers. And, probably wisely, they don't allow the psychological gamesmanship between the two Judd Apatow veterans to ignite full-blown comedy. But what laughs are there exist at a slight remove from everything else. However, Jay and Mark's gifts for insight and social awkwardness almost win the day. Cyrus's presumptuousness and lack of a filter (he claims when Molly is drifting away from a man she "overcompensates sexually") can sound like a manufactured trait, but it's uncomfortably funny and helps establish the necessary dynamic. And some of the shifts in power between John and Cyrus are beautifully subtle, yet tectonic considering what's at stake.

With Cyrus, Mark and Jay are growing up. Reilly and Tomei are older than most of their lovelorn, twentysomething protagonists. The camerawork is less "fly on the wall" (although, enough with the snap zooms already). And the brothers have earned enough respect to attract executive producers like Tony and Ridley Scott, and name talent willing to work within operational guidelines reminiscent of Mike Leigh. Indeed, Cyrus is strong enough to free them from their tiny corner of deep-indie cinema. But today's films have so little interest in exploring character that it's worth lamenting when one of the last champions of character specificity undershoots the target.