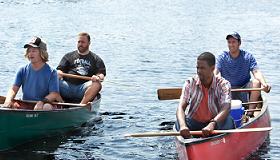 Current Saturday Night Live (SNL) comic Will Forte may have bombed in the recent SNL spin-off MacGruber, but a dream team of SNL alums, including ringleader Adam Sandler, put the luster back in the SNL reputation with the audience-pleasing, all-ages comedy Grown Ups. Directing Sandler for the fifth time (with two more comedies forthcoming), directing vet Dennis Dugan has yet to please critics, but critical word of mouth is unnecessary with a marquee cast of popular funny men unloading all the slapstick gags and sarcastic zingers mainstream audiences want. As an added bonus, writers Fred Wolf and Sandler complement the lowbrow humor with some good-natured lessons regarding middle-aged parenting and the struggle to tear kids from their gadgets in service old-fashioned play. Happy Madison Productions and Relativity Media have stayed true to proven physical comedy formula and produced what's arguably the most family friendly of all Sandler comedies. While critics (like myself) will wonder how a movie boasting Chris Rock, Kevin James, Rob Schneider and Sandler isn't funnier, Grown Ups still promises to be a crossover smash for Columbia Pictures, likely drawing young teens as well as their parents. Reviews will be deservedly mediocre at best but Grown Ups will rise to the top of the already impressive Sander box office chart and turn out to be one of his biggest hits.

Five childhood friends and former teammates of their citywide champion junior high basketball team; Lenny (Sandler), Eric (James), Kurt (Rock), Marcus (Spade) and Rob (Schneider) reunite over a Fourth of July weekend at the same lake house where they celebrated their hoops championship 32 years before. Their beloved coach has recently passed away and they've just come together for his funeral. In the process, they also catch up and learn about themselves.

Sandler is the straight man in Grown Ups, playing a high-powered showbiz agent trying to teach some life lessons to his spoiled kids. Luckily, there's abundant lunacy to keep slapstick fans laughing even with a subdued Sandler front and center.

Kevin James dances with a Kentucky Fried Chicken tub on his head. David Spade is at his smarmy best getting drunk and chasing women. Rob Schneider is the stooge of the film with an outrageous hippie wardrobe and hairstyle that's referred to as "Elvis as an oompa loompa". Chris Rock has great fun playing against type as a timid househusband fixated on about his pumpkin risotto; although he still unloads plenty of comic zingers.

Dugan makes clownish use of his supporting cast. Maya Rudolph is as funny as ever as Rock's wisecracking wife. Maria Bello shows surprising skill for comedy as James' celebrity-obsessed wife. Salma Hayek looks great as Sandler's spouse and is game for slapstick, even walking through the lake house with toilet paper stuck to her in one scene. A cameo from Steve Buscemi, in a body cast no less, adds to the fun.

Still, Sandler comedies are about gags not visual flash and Grown Ups unloads running jokes involving a mother-in-law who farts constantly, a mother who breastfeeds her 4 year old son and parents peeing in public pools. For the adults in the audience, Dugan also offers a period soundtrack and familiar lessons for parents who struggle with their kids' addictions to gadgets.

Critics, myself included, continue to gush nostalgically about Adam Sandler in Punch-Drunk Love--just like we did with Jerry Lewis in The King of Comedy. But Sandler's army of fans want the low-brow gags of Grown Ups, and for them a man squirted with breast milk is as good as it gets.