close
Much more than a backstage pass

Joan Rivers: A Piece of Work 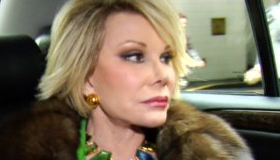 Liking Joan Rivers is like befriending the school bully-it's tactical and troublesome-but this documentary lets her argue her own worth and she comes out winning. Tracking her 75th year of life, directors Ricki Stern and Anne Sundberg treat their brassy subject with respect, not devotion, and we realize that respect is all she's ever wanted...along with a Manhattan apartment that looks like Versailles and enough costume necklaces to choke a hydra. Joan Rivers: A Piece of Work debuted to raves at Sundance in January and hasn't lost steam since. For the small but enthusiastic documentary crowd and the comic's diehard fans, it's a must-see; though Rivers' reputation so precedes her that a wider audience likely won't pony up to spend 84 minutes with the bitch of the red carpet. (Though if they did, they wouldn't regret a second.)

The doc opens with Rivers pancaking on her makeup. It's a ritual tied closely to the doyenne whose nipped, tucked and puffed face has been the butt of more jokes than yo momma. To audiences under 40, Rivers is her face. And that's her contradiction. She's at war with herself, the media and her career, and the battleground is her face. In one moment she can sigh that, "No man has ever told me that I'm beautiful," and recognize that it's her blonded, botoxed artificial youth that's kept her in the public eye. But a second later, Rivers can accept a gig making fun of other women's looks. When Gabourey Sidibe wore an orange dress, she snarked, "You decide. Precious or The Great Pumpkin, Charlie Brown?" She's hardest on herself, but does that excuse her from shining that harsh light on others?

It doesn't, but Rivers is so disarmingly frank about every area of her life that we want to wrap her brittle bones in a hug. "That's fear," she says while paging through an empty calendar, and she'll do anything to fill her days with money-making publicity. At 75, she rarely says ‘no' to any gig, no matter how punishing the schedule. One night in Wisconsin? Sure thing. Three days on a cruise ship? Of course. That's been her lifelong career strategy and she's sticking to it-how many other female comedians have stayed active and famous for five decades? ("Good luck to the next queen of comedy, because I'm not abdicating," she growls, and you can picture a dartboard with Kathy Griffin's face on it.) The camera doesn't shellac her with sympathy when she tucks herself into yet another red eye. It pulls back, like a safari tracking a lioness, a respectful distance that acknowledges Rivers' strength.

Stern and Sundberg's doc works best when showing us how much work Rivers puts in to stay at the top. She's a workaholic with file cabinets of cross-referenced jokes-and they're shockingly funny. Sorry Sarah Silverman, Rivers was doing abortion jokes in the '70s. But her surprising and sad truth is that she really wanted to be a legitimate actress-a disappointment that gnaws at her like a failure. "My career is an actresses' career, and I play a comedian," she sighs. In her youth, she was too gawky to be a romantic lead; when she was older, she was already Joan Rivers. "I paint. Who cares?" she notes. She's made herself a media icon, but knows she's had to slice off 70 percent of herself to do it. In one scene, Rivers arrives at her own comic roast and she and her entourage are wary that they've signed up for a whole evening of plastic surgery jokes. And they have. We might have made the same jokes 90 minutes earlier, but the gift of this movie is that now they seem unfair. Not because they're too mean-because they're too superficial. This is a smart, sharp woman with a full life under her 20 year old skin. Go ahead and make fun of her-just try harder.