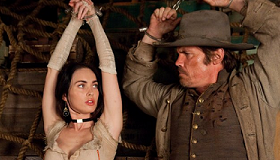 Jonah Hex is not a good movie, but it's a great cautionary tale about what happens when a film loses its way. Based on reports, the project was probably doomed from the start, but panicky tinkering only made it worse. Conceptualized and re-conceptualized, written and re-written, shot and re-shot, cut and re-cut, the final product is the world's longest short film, an ugly 81 minutes that's been chopped, pressed and formed into a mid-budgeted summer adventure that screams "let's get this over with" in every substandard frame. To claim Jonah Hex is too insignificant a character in the DC universe to justify an adaptation isn't entirely fair. Iron Man was a B-player at Marvel and he turned out alright. Even Ghost Rider is getting a sequel. Any character is a good character if treated properly. But the moment Crank's Neveldine & Taylor, as they are collectively known, signed on to write and (originally) direct, Jonah Hex was on an irreversible course to a cacophonous and dunderheaded oblivion. As the cursed Confederate bounty hunter who can talk to the dead, Josh Brolin will get none of the blame for this and, in fact, is the only thing keeping this misfire afloat. Those with a serious jones for comic book movies and a high tolerance for choppy storytelling will whip out their wallets. Very few others should, or will, be interested.

It's possible that every question one has about the world of Jonah Hex would be answered if the audience could read along with the original script, or if eventual director Jimmy Hayward (the obvious choice after Horton Hears a Who!) were to stand on the side of the screen with a microphone and provide an audio commentary. The revisionist West envisioned in this movie includes supernatural forces, but they're not properly explored so things seem arbitrary. Hex can talk to the dead, but there are an awful lot of rules and most of them are weighted towards showing off CGI and making sure Hex gets the information he requires. That information is the whereabouts of former Confederate General Quentin Turnbull (John Malkovich). Turnbull was responsible for the murder of Hex's family and the facial disfigurement that serves as Hex's visual signature. Still not ready to concede to the North, the vaguely Tea Party Turnbull also plans to destroy Washington D.C. during the big centennial celebration. He hates our government and is willing to exercise his Second Amendment right to bear lots and lots of arms to shrink it down to heaps of rubble in a final loud and numbing exercise in pyrotechnics. His weapon of choice is a cumbersome, Dr. Loveless-style contraption that involves a small cannonball being shot into the air and striking a larger cannonball, causing the larger cannonball to explode. (Or possibly the smaller cannonball will explode. Or possibly both cannonballs will explode. It's all a bit fuzzy).

Hex's search for Turnbull takes him to dusty towns where everyone invokes his name in angry whispers, to which Hex responds with angry, whispered sarcasm. But Hex's low growls are no affectation: after killing Hex's wife and child, Turnbull scarred him with a branding iron. Since then, Hex has been sporting a thick and nasty thread of skin connecting his upper and lower lips, which keeps him from speaking clearly and, presumably, taking up the clarinet. Here, and in the original 1970's comic, Hex is flesh and blood, but he's also a supernatural loner fated to roam the endless wasteland living in violence and tortured by his past. His otherworldly powers were provided by Native Americans who pulled Hex back from the dead after Turnbull murdered his family. Since Native Americans were pretty plentiful in those days, it's possible there are others with Hex's power, but we're not sure. At one point, we're introduced to a grotesque, wiry, snake-man who fights MMA-style in the ring. But who is this creature? How did he come to be? Maybe the answer requires more than the macho grunts and bitter aphorisms that pass for dialogue and so was discarded. Only the Native Americans know for sure.

Jonah Hex is obviously compromised and not the film anyone thought they were making when they signed on. But it's a film that Warner Bros thought was in good enough shape to release as counter-programming to Toy Story 3, and that choice is just plain sad. When you subtract the end credits and the slow motion shots of Jonah on his horse we're left with about 75 minutes of disparate story parts that don't fit together and are jerkily paced. The painful music was co-written by Mastodon, which might be a heavy metal band or, given the score's obnoxiousness, an actual mastodon. The film is also poorly shot. Often the frame is too busy and too dark. The CGI work is fine but, for reasons that can't possibly be justified, computer wizardry was used to smooth out the face of Megan Fox, who plays Lilah, a prostitute with the hots for Jonah and the corseted waist size of a Capuchin monkey. Gamely employing her limited range to sell an underdeveloped character, Fox does what you'd expect in a film like this: shows cleavage, nails a bad guy in the testicles and gets kidnapped by Turnbull's men in order to bait Hex into a trap, which winds up being irrelevant because Hex finds Turnbull without even knowing Lilah was abducted.

Too much material has been left out for the rest to make complete sense. But there are lots of death-signifying crows, so the movie should have the ornithologist demo locked up. Everyone else is left to enjoy Brolin, without whom this amalgam of Western tropes, paranormal activities, heavy PG-13 violence and CGI would be almost unreleasable. In looks and vibe, Brolin (No Country for Old Men) embodies the classic, laconic Western hero. John Ford would have loved him. He could have knocked back a few with Lee Marvin and Robert Mitchum. It would take a lot to put Brolin in a Western and make him look foolish or out of place. Even Jonah Hex can't manage that; it's the film's one failure we can get behind.