close
Action/comedy is dead on arrival 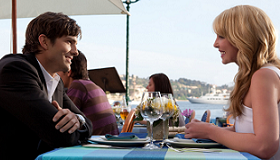 The ugly if obvious truth about Killers is that two comely stars do not a movie make. After this bomb, Katherine Heigl and Ashton Kutcher may qualify as two of the most attractive and prematurely washed-up screen actors Hollywood has ever produced. The fact that their physical beauty is woven into the dialogue without being successfully deployed for laughs or plausible sexual tension only adds to the lameness. Same goes for setting the movie's early scenes on the French Riviera. Gone are the days when shapely headliners in chic locales guaranteed big business.

Jen, munching Maalox (she's the neurotic, squirrelly type), and Spencer (bare-chested) meet in Nice where she's vacationing with her parents and he's assassinating an arms dealer. They fall for each other and, eager to settle down, he quits his job as a government hit man. Three years later, their comfortable suburban existence is shattered when he's suddenly dragged back in to the spy business. He never told her what he was doing for a living when they met and (guess what?) she's pissed off when she finds out. The scenario descends into squabbling and shooting, none of it well-written or well-staged and most of it irritating.

Speaking of (mis)casting, there's something odd about pairing Tom Selleck in the part of Jen's overprotective father and Catherine O'Hara as her dipsomaniac mother. While you can appreciate that the filmmakers were, in this respect at least, trying to be unconventional, it doesn't work; nor does putting Martin Mull in the humorless role of Spencer's spook handler.

Overall, the blending of espionage and comedy is bungled, which is too bad since the familiar premise isn't the worst ever devised. There are a couple of cheap guffaws courtesy of Ms. O'Hara, but generally speaking Killers is bereft of wit and stylish intrigue. You're stone-faced when you're supposed to laugh and can't stifle a chuckle when it's all-too-often trying to be serious. Kutcher's attempts to channel It Takes a Thief urbanity miss; a smirk is always visible beneath the surface. And the assumption that Heigl is adept at madcap comedy once again proves suspect.

They have director Robert Luketic, he of Legally Blonde and the charmingly underrated Win a Date With Tad Hamilton! (but also, he of The Ugly Truth and Monster-in-Law), to blame. What's most surprising is how amateurish the production is. In a number of badly under-lit scenes, it's impossible to make out who is onscreen, and the soundtrack is out of sync in places.

Personally, I find Kutcher and Heigl likeable and wish them well in their careers. But you have to assume many people will want to do them harm after shelling out to see Killers, a better title for which would be Mr. & Mrs. Snooze.