close
Full of fun and thrills 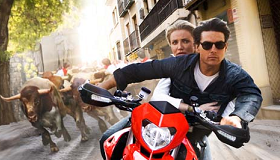 Returning to his full-throttle movie star mode for the first time since 2006's MI3, Tom Cruise reclaims some serious star power as the driving force behind this stylish, globe hopping, action-packed comedy that starts at full blast and never lets up. With Cruise as a covert agent and Cameron Diaz as the girl who unwittingly becomes a pawn in his high-stakes face-off with the bad guys, audiences looking for pure escapism are in for an irresistible summer treat with Knight and Day. Despite unfortunate similarities to the far inferior recent release Killers and competing against killer June competition, good word of mouth should eventually help build a tidy domestic box office with even stronger international prospects due to the high wattage pairing of Cruise and Diaz.

The opening sequences in the Wichita Airport gets the picture off to a crackerjack start as a rogue secret agent, Roy Miller (Cruise), bumps into car enthusiast June Havens (Diaz). After Roy does away with the other baddie passengers and pilots and crash-lands their aircraft in a cornfield, June soon finds herself caught up in his ever-widening world of danger and espionage. This sets off a series of events that finds Roy putting June in harms way on a whirlwind worldwide excursion where they are chased from deserted islands to snow-capped Austria to the running of the bulls in Spain. As the story unfolds we find numerous shady characters, as well as the CIA, following Roy, and all are seeking a valuable battery designed by geeky inventor Simon (Paul Dano). Think Bourne. Think Bond. Lighten it up and mix in elements from at least a half dozen other films from Charade to Romancing The Stone and you get an idea where screenwriter Patrick O'Neill's cinematic inspiration lies.

What truly elevates this material is a wonderfully loopy and appealing performance from Cruise, who hasn't been this loose and comfortable on screen in a long time. This is definitely the T.C. his fans will be happy to see back in action. To paraphrase his character Roy's favorite catchphrase, "he's got this." Diaz is equally winning, never descending into dumb blonde territory (like Katharine Heigl did in Killers) and keeping her emotions in check even as her world comes crumbing down around her. As a CIA honcho Viola Davis (Doubt) carries the right amount of gravitas, while Peter Sarsgaard also makes all the right moves as an agent seeking Roy. As the nerdy Simon, Dano doesn't have a whole lot to do but he's fun to have around.

Thanks to James Mangold's expert direction, the pace never lags and lives up to post-Bourne audience expectations for this sort of frothy thriller, even if it all gets a little too frenetic at times. Mangold clearly got the best of his stars in the midst of complete chaos and pulls off numerous action set pieces with great skill and smarts. Having conquered various genres including romantic comedy (Kate And Leopold), suspense thriller (Identity), western (3:10 To Yuma), drama (Girl Interrupted) and musical biopic (Walk The Line), Mangold adds action/comedy to his resume and proves his Howard Hawks-like versatility with this handsome summertime confection.