close
It took a whole village of A-list talent to mount this sorry excuse for a live-action family film. 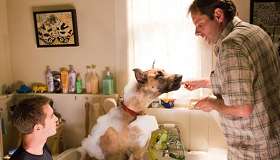 Owen Wilson really needs to fire his agent. In Marley and Me he was the owner of an incorrigible dog; in Marmaduke, the wholly unnecessary adaptation of the one-panel comic, he is cast as the voice of the rambunctious Great Dane. If Wilson's career continues apace, Wes Anderson's one-time golden boy will play a chew toy in the not too distant future. But Wilson is far from the only talent wasted in this dire tale of what happens when a Kansas hound and his family relocate to Orange County. Very small children may well take a shine to the big, goofy dog and his furry friends, but parents and older siblings will be left squirming in their seats at a bland, predictable blend of bad comedy and sentimentality. Quality scarcely matters, though-with the onset of summer vacation, the kiddie matinee crowd should turn this into at least a moderate box office success.

Though his family is perfectly content with their middle-class existence in Kansas, marketing executive Phil Winslow (Pushing Up Daisies pie man Lee Pace) thinks they would be happier with even more and so he accepts a new position as the marketing top dog for an organic pet food company in SoCal. New boss Don Twombly (William H. Macy at his most weirdly passive-aggressive) rides the whip hard, determined to nail down an agreement with PETCO. At the same time, he insists on holding all of his meetings at the local dog park where Marmaduke falls in love with Twombly's lovely Collie, Jezebel (Stacy Ferguson), and finds friendship with three of the local "mutts:" Mazie (Emma Stone), an Australian Shepherd; Raisin (Steve Coogan), a Dachshund/Cairn Terrier mix; and Giuseppe (Christopher Mintz-Plasse), a nervous Hairless Chinese Crested. But he also runs afoul of alpha dog Bosco (Kiefer Sutherland), the Beauceron leader of the pedigree set and the enforcer of the strict social separation between pedigrees and mutts.

As Phil puts work before the wife and kids and as Marmaduke pursues Jezebel and (in a teen movie parody) pedigree popularity at the expense of true pals like Mazie and his kitty "brother" Carlos (George Lopez), the movie broadcasts obvious messages about bullying, classism and the importance of family and friends. But those Afterschool Special aspects take a backseat to stunts involving dancing and surfing dogs and to comedy that ranges from mild gross-out humor to slapstick. The latter mostly revolves around Marmaduke's clumsiness and the way his sheer size can get in the way, creating instant pandemonium, but Pace and Macy-or at least their stunt doubles-take their share of falls, too. Writers Tim Rasmussen and Vince Di Meglio try to wring both laughs and pathos out of Phil's uneasy relationship with his ginormous hound, culminating in a man-dog adventure sequence late in the third act, but the attempt to inject drama into the lackadaisical tale is a case of too little way past too late.

What is truly depressing is that apparently more effort went into the CGI to make the dogs appear as if they are speaking than into script. None of the actors can be faulted. Whether lending their voices to the pooches or inhabiting one of the human characters, they all perform admirably-as do the large cast of canines, the one cat and their trainers. It is just too bad that collective effort is wasted on a movie this howlingly bad.