close
What do we mean when we “support the troops”? 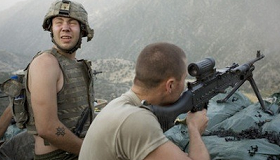 Filmmakers Sebastian Junger and Tim Hetherington bring the reality of war to the big screen with Restrepo. What began as an assignment for Vanity Fair Magazine and later as reports for ABC News morphs into a feature-length documentary that limns a year in the life of U.S. soldiers deployed to one of the most dangerous spots in Afghanistan. Moving and at times as riveting as any dramatic narrative, the doc recently screened at the San Francisco International Film Festival with Hetherington in attendance. He describes his and Junger's job as that of witnesses. Restrepo is their powerful testimony. War films have been a hard sell at the box office in the near decade that the U.S. has spent in its separate battles in Afghanistan and Iraq, but the film will arrive in theaters with festival buzz and a Sundance Grand Jury documentary award. With an appeal to fans of human interest stories, as well as those interested in war and politics, the movie should score a moderate success.

The title has a double meaning. Restrepo is what the soldiers of Battle Company of the 173rd Airborne Brigade name their outpost in the remote Korengal Valley in eastern Afghanistan. But it is also the name of one of their comrades, Juan Restrepo, a medic caught on camera in the film's opening scenes, who was killed in action prior to the Korengal posting. The name is a tribute but also a reminder of what can happen to anyone of them at any time, especially in a place like Korengal, where the Taliban hide in the surrounding mountains and where combat operations are carried out on foot.

Junger and Hetherington capture it all. There are moments of calm or even boredom when the troops are not engaged with the enemy, but those can be interrupted at any time as the Taliban fires on the outpost. The actual combat operations are chaotic, scary and sometimes heartbreaking. The filmmakers are discreet and respectful in the worst moments, but that doesn't take away from the power of their images. Alternating with the Korengal footage are interviews with the soldiers conducted several months after their deployment ended. They are an engaging group, young men it is easy to emotionally invest in, and that makes watching the film that much more nerve-racking and affecting.

There is no attempt to widen the film beyond what the platoon encounters. Junger and Hetherington don't try to put the war or the troops' combat operations into context. They simply record what they and the soldiers experience. It's a brilliant strategy. By keeping their focus so narrow, the filmmakers have created a wrenching piece of work that allows the viewer to draw his own conclusions—and should make anyone of whatever political persuasion think about exactly what they mean when claiming to "support the troops."