close
Now it really feels like the summer has begun! 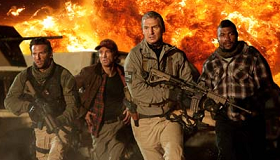 A surprisingly satisfying big screen adaptation of the '80s TV phenomenon, The A-Team provides action fans with a great excuse to hit the theatres. In fact, director Joe Carnahan has crafted just about the best action film in years, at least certainly since star Liam Neeson's last actioner, Taken, grabbed fans in the same breathless style. We'll give this one an A+ for adrenaline pounding excitement, explosive (literally) entertainment and pure movie fun! Forget that you could write the uncomplicated plot on a napkin, young males and their nostalgic fathers will line up for it. And there's plenty for their dates and mates, too, in this testosterone-packed ride. This '80s update should easily translate its small screen hit status into major 2010 box office dollars.

Playing like the ultimate two-hour episode of the series (if it had multi-millions to spend on explosions, elaborate stunts and expensive effects), this revved-up movie version offers a perfect mix of non-stop thrills and clever dialogue, mixed with an engagingly light touch. Nobody is taking anything too seriously here, and that's the fun of it.

The featherweight storyline adheres closely to the outline of the series: a Special Forces unit led by cigar chomping Hannibal Smith (Neeson), and including the wily and handsome Face (Bradley Cooper), brawny and ‘fool pitying' B.A. Baracus (Quinton "Rampage" Jackson) and Howlin' Mad Murdock (Sharlto Copley), is wrongly accused of a crime but escapes prison and goes underground to do things their way. Like the TV show, the whole enterprise gets by largely on the considerable chemistry of its four leading guys. With Vancouver and its environs convincingly standing in for several worldwide locations, from the deserts of Mexico to the Middle East, the tale has been brought up to modern day with a move from the Vietnam Era to the current American disengagement from Iraq. Following the orders of General Morrison (a convincing Gerald McRaney), the four are brought together on a covert mission to recover missing counterfeit plates said to be the handiwork of deposed leader Saddam Hussein. Unfortunately they are double-crossed and set up for a military trial that lands each of them in separate maximum security prisons. With the "help" of shady CIA agent Lynch (Patrick Wilson) they escape, reteam and are doggedly pursued by Charissa Sosa (Jessica Biel), a captain with the military's Defense Criminal Investigation Service unit and (just to further complicate matters) an ex-flame of Face's who gets in their way as they try to clear their names and complete the mission.

With mind boggling stunt sequences involving helicopters, planes, tanks and tons of guns, Carnahan and his co-screenwriters, Skip Woods and Brian Bloom (who also has a role as a bad-guy private military contractor), clearly prefer explosions over exposition, but keep the fun coming consistently within a two hour running time. Wisely they have reduced the series' camp factor and brought it in line with audience expectations for this kind of patented summer flick.

The A-Team is ideally cast with a commanding Neeson having a hell of a time as the mastermind of the quartet ("I love it when a plan comes together"). Cooper is wryly amusing, UFC light heavyweight champ Jackson makes a perfect B.A. and District 9's breakout star Copley steals it all as the wacko Murdock. Biel holds her own alongside the otherwise all male company and Wilson effectively walks a fine line, keeping us guessing just which side he's really on. A final cameo from an uncredited Jon Hamm seems to set up an inevitable sequel. Stick around through the end credits and be rewarded with additional cameos from original A-Team TV co-stars Dirk Benedict and Dwight Schultz. Mr. T declined the producers offer to participate.