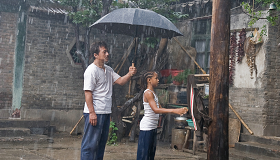 Crane kick? Nah, this big-hearted reprise is all about the standing split, the inner thigh-splintering pose star Jaden Smith strikes on every billboard in town. Harald Zwart's retooling takes the silhouette of the '84 classic but colors in new details; the two films share only a shape and a pulse and an old-fashioned eagerness to please. Getting fans of the original in the multiplex door might be a fight-the jaded show no mercy to remakes-but the film will find its champions (and good box office) in fresh-eyed kids and families.

Jaden Smith is destined to be a star by the force of will (and wallets) of parents Will and Jada Smith, both producers on The Karate Kid. But he's also got the raw material. Like his dad, he's got the makings to be a heartthrob guys respect-that rare collision of charisma, cool cred and cute. He's still unformed and that's part of his charm. Here, as a boy wrested from Detroit and replanted in Beijing, he's shy, sullen and cocky-a natural kid who plays with different personas, but doesn't play to the camera for validation. And on the rare moments he busts out his dad's grin, you realize: he's got it.

When Smith and single mom Taraji P. Henson land in China, Zwart doesn't play to orientalist exotica. He flashes us the skyscrapers of a modern metropolis and lingers on the Beijing National Stadium, the steel-boned birds nest constructed for the '08 Olympics. Later, we'll get temples and hypnotized snakes and the Great Wall swept clean of tourists-there's a money shot. But this isn't a city an American city kid can conquer. In short order, Smith makes a friend (Luke Carberry, who disappears after three scenes), meets a girl (Wenwen Han, a violin prodigy with a sculptural haircut) and unearths an enemy (Zhenwei Wang, a bully with a face that begs for a fist). The bully studies under the ruthless Rongguang Yu, a kung fu master who likes to make his students bleed. His signature lesson is that a winner never quits while their opponent is still conscious.

Enter an unsmiling Jackie Chan as the handyman who teaches Smith kung fu. What a pleasure to see Chan unhappy after a decade and a half of playing a grinning fool. Chan's a quiet misanthrope. His heart of gold is never shined up and put on display. Like the film around him, he doesn't sweat for our applause. Instead, he and Smith and their starring flick march on, staying straight and true to their work-hard ideals. Which is what makes Karate Kid a winner-the confidence to not smother the story with in-jokes or gimmicks that prove the filmmakers have studied the original. The Karate Kid trusts you'll choose to come along on the journey, and you do. While we all know Smith will face off against his attackers at the big match, his story never feels calculated or focus-grouped for maximum audience appeal. And when he does prove his worth, we cheer like it's the first time.